Mention the corner of Michigan and Trumbull to any Detroit sports fan and they will instantly think of Tiger Stadium, the legendary home of the Tigers from 1912 to 1999. However this site in the Corktown neighborhood of Detroit was the location of professional baseball for more than a decade prior to the construction of Tiger Stadium. The team that became known as the Tigers were charter members of the Western League in 1894, playing at League Park. In 1895 club owner George Arthur Vanderbeck purchased a 3.5 acre site along the corners of Michigan and Trumbull Avenues and built a new 5,000 seat ballpark. It was named after Charlie Bennett, a catcher for the Detroit Wolverines in the 1880s who was the first player to use a chest protector. On April 28, 1896 the Tigers played their first professional game at Bennett Park. The ballpark featured a small wooden grandstand in the shape of the letter L that was primarily behind homeplate and stretching down the third base line. On September 24, 1896 the club experimented with adding electric lights for a game. They only used this for one game and baseball under the lights did not return to Detroit until the 1940s.

A new chapter in the history of the franchise began in 1900 when they joined the newly formed American League. The Tigers played their first game as members of the league on April 25, 1901, a win against Milwaukee. Prior to the start of that season bleachers were added in right and center field increasing the capacity to 8,500. Center field at Bennett Park was spacious at 480 feet. Located here and in play were the Tigers clubhouse, a groundskeepers shed and the scoreboard. After the 1907 season the Tigers pushed home plate 40 feet towards the outfield, adding additional seats behind homeplate and permanently installed bleachers in right field. Another expansion occurred in 1909 increasing the overall capacity to 14,000. During this time the Tigers were very successful winning the American League pennant in 1907, ’08 and ’09. They were led by starts Ty Cobb, Bill Donovan and Ed Killian. By 1910 Bennett Park was beginning to deteriorate as it was a primarily wooden structure and in other cities new steel and concrete ballparks were constructed during this time. Owner Frank Navin decided to construct a new modern ballpark for the club on the same location of Bennett Park. The Tigers won their final game here against Cleveland on September 10, 1911. That offseason the ballpark was demolished and a new steel and concrete ballpark, Navin Field (later renamed Tiger Stadium) was constructed. The entire playing field was shifted as homeplate at Bennett Park would have been located in right field at the new ballpark. 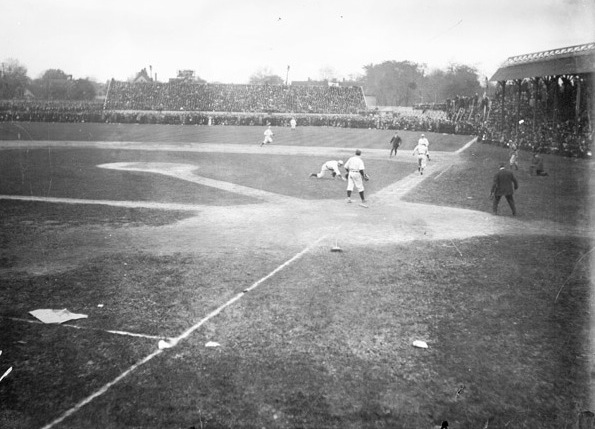 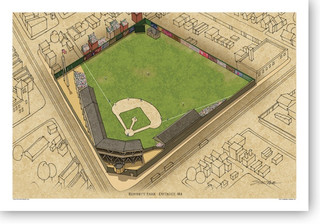 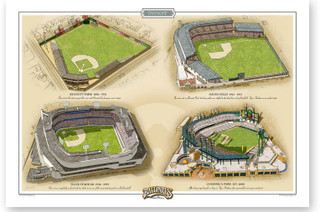