Don’t mistake this ballpark for the one located in Chicago! Los Angeles’ Wrigley Field was the original Wrigley Field, bearing the name when it opened in 1925 as the Cubs ballpark was known as Cubs Park. In 1903 the Los Angeles Angels became charter members of the minor league, Pacific Coast League. For over two decades the Angels played at the 15,000 seat Washington Park. In 1921 owner of the Chicago Cubs, William Wrigley, purchased the team and sought to get the City of Los Angeles to improve Washington Park. When the city declined his request Wrigley drew plans for a new ballpark that was very similar to the Cubs ballpark in Chicago. Construction began in 1924 and the ballpark, named after Wrigley, opened on September 29, 1925.

The scaled down version of the Chicago Cubs ballpark had a seating capacity of 21,000 with two decks stretching from behind homeplate down to each foul pole and bleachers in right field. A 15 foot high outfield wall was in left field with ivy growing on it. One distinct feature from its Chicago counterpart was its facade. It featured a Spanish-style exterior with a twelve story office tower was at the entrance of the ballpark. From the playing field a clock was visible on the tower. When the Dodgers moved to Los Angeles they forced the Angels to move to Spokane, WA. Instead of playing at Wrigley Field while their new ballpark was built the Dodgers played at the Los Angeles Coliseum. The ballpark remained empty until MLB awarded the area an expansion franchise, the California Angels, that became part of the American League. On April 27, 1961 the Los Angeles Angels played their first game at Wrigley Field. They played one season here before moving to Dodger Stadium while their own new stadium, Anaheim Stadium, was constructed. Wrigley Field was used for a variety of events before being demolished in 1969. The site now consists of the Gilbert Lindsay Park and the Kedren Community Health Center. 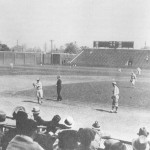 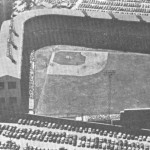 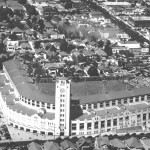 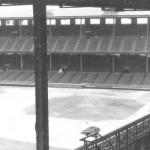 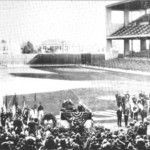 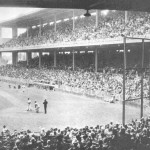 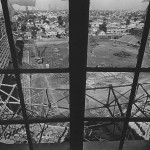 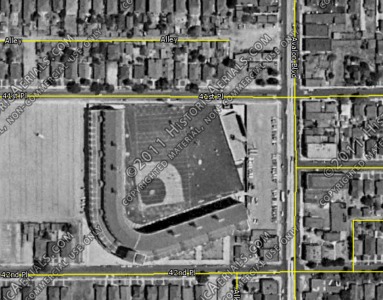 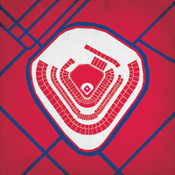