The 2011 season marked the 18th and final season for the Marlins at Sun Life Stadium as they move into their new stadium in 2012. Opening in 1987, Sun Life Stadium (then called Joe Robbie Stadium) was the first stadium built primarily for football, and later used permanently for baseball. Miami Dolphins (NFL) owner Joe Robbie first lobbied for a new stadium in 1984 for the Dolphins. After a site was selected, construction began December 1, 1985. In August 1987, the first football games was played at the stadium. Three levels of seats enclose the entire stadium. When the stadium was built for the Dolphins, Joe Robbie insisted on a rectangular grandstand layout that was wider than needed for football believing that baseball would possibly come to Miami. The stadium hosted 13 pre-season baseball games prior being award the Marlins and has had several names over the years. Originally known as Joe Robbie Stadium, it was renamed Pro Player Stadium in 1996 and renamed Dolphin Stadium in January 2005. In May 2009, the stadium’s naming rights were briefly bought by Land Shark Lager, a beer that Jimmy Buffett markets in a deal with Anheuser-Busch. The facility is now known as Sun Life Stadium after Sun Life Financial purchased the naming rights for $7.5 million annually for five years.

In 1991, Major League Baseball awarded South Florida a baseball franchise. In order to accommodate baseball several changes were made at Sun Life Stadium. Retractable seating on the north side of the stadium was added, a baseball press box in the southwest corner of the facility was constructed, dugouts were built, and a hydraulic disappearing pitcher’s mound was installed. On April 5, 1993, the Florida Marlins played their first game at the stadium. Three main levels, consisting of 75,000 orange and teal seats surrounded the playing field. The majority of the seats in the upper deck, except behind homeplate were closed for baseball, giving Sun Life Stadium a seating capacity of just over 36,000. At various times throughout the Marlins tenure at Sun Life Stadium tarps have covered many of the upper decks to lessen the effect of having empty seats during the baseball season. Built mainly for football, the outfield fence had many quirks and different angles providing for some interesting plays in the outfield. The left field wall was 33 feet high as seats for football were retracted behind the fence. Nicknamed the teal monster, an out-of-town scoreboard was located here until 2010 when it was replaced with advertisements. Two HD videoboards are located atop opposite ends of the upper deck to provide fans with video replays and scores around the league.

Although the Marlins played at one of the worst stadiums in baseball  they have had several successful teams, winning the World Series in 1997 and 2003. The Marlins played their last game at the stadium on September 28, 2011 against the Washington Nationals. They moved into their new ballpark, Marlins Park, in April 2012. Sun Life Stadium remains the home to the Miami Dolphins and the Miami Hurricanes (NCAA). 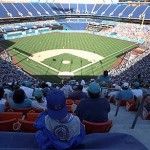 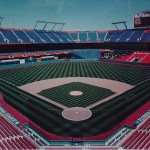 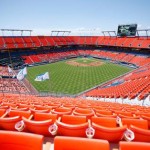 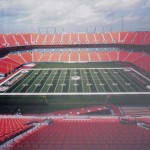 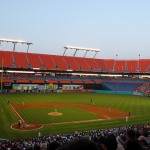 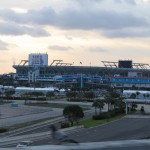 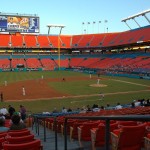 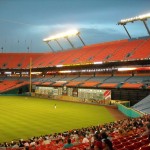 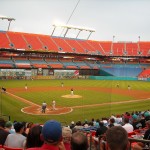 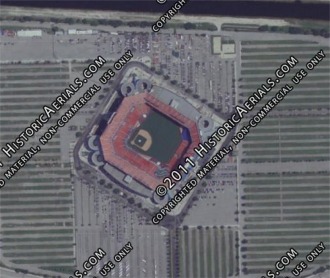 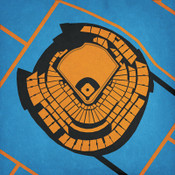