It’s the Summer of 1970, you’re an Orioles fan in Baltimore and where are you at? It’s likely you’re at Memorial Stadium in the northeastern part of the city in the Waverly neighborhood where you are watching stars such as Jim Palmer, Boog Powell, Frank Robinson and Brooks Robinson battle as they win 108 games during the season and go on to win the 1970 World Series. It’s the second World Series title in the history of the Orioles franchise, even though professional baseball has been played in Baltimore since the 1880s.

Professional baseball in Baltimore was established in 1882 when the Orioles ball club became a member of the American Association. They later became members of the National League in 1892 and charter members of the American League in 1901 before moving to New York after the 1902 season becoming the Highlanders (now known as the Yankees). A Minor League Baseball team, also known as the Orioles, began playing in Baltimore in 1903. Dating back until 1882 the Orioles played at a four different versions of ballparks known as Oriole Park, all located in northeast Baltimore and built near each other. In 1914 the Federal League was established, placed a club in Baltimore (the Terrapins) and built a new ballpark, Terrapin Park, across from Oriole Park along 29th Street and Greenmount Avenue. After the 1915 season the Federal League was dissolved and the owner of the Orioles purchased Terrapin Park, renamed it Oriole Park and move the Orioles here. From 1916 until July 4, 1944 the Minor League Baltimore Orioles played at Oriole Park before it was destroyed by fire. Everything owned by the Orioles was destroyed in this fire and it forced the team to play on the road for several weeks before moving into Baltimore Municipal Stadium.

Located several blocks away, Baltimore Municipal Stadium, was built in 1922 as a football stadium, but became the home to the Orioles in Summer 1944. The Minor League Baltimore Orioles franchise was very popular and drew huge crowds as they went on to win the International League Championship that season. In 1944 Mayor Theodore R. McKeldin announced plans to either renovate Municipal Stadium or build a new stadium. In 1947 voters approved a $2.5 million measure to rebuild Municipal Stadium. The entire stadium was rebuilt beginning in 1949 and completed a year later. The original grandstand was enclosed on the north side but rebuilt with the main grandstand constructed on the south side of the site. The International League’s Orioles played their first game at the new stadium on April 20, 1950. Named in honor of soldiers who died in World Wars I & II, Memorial Stadium had a seating capacity of 31,000 that consisted of a single tier grandstand. Hoping to lure a MLB franchise, the city added an upper deck to Memorial Stadium increasing the capacity to 47,700.

Major League Baseball returned to Baltimore after over a half-century hiatus in 1954 when the Browns moved from St. Louis becoming the Orioles. The team played their first game at Memorial Stadium on April 15, 1954. Memorial Stadium featured two primary seating decks, the lower and upper decks that stretched from behind homeplate and in a horseshoe shape down the first and third base lines. The lower decked extended into the outfield. Baltimore brewery, Gunther Brewing Company, sponsored the main scoreboard in right-center field, the largest electrical scoreboard in the world in 1954. A hedge initially served as the centerfield fence, but was replaced by a wire fence. Outside, the facade was a reddish-brown brick, and the home plate entrance had a tall concrete wall bearing an inscription honoring the city’s war dead.

Memorial Stadium underwent several expansions and changes during its existence. By 1961, 2,600 field box seats and new dugouts were constructed at Memorial Stadium increasing the capacity to 49,000. The bullpens were moved from down the base lines to behind the outfield fence. By 1964, the upper deck was lengthened, with two sections added at both ends of the horseshoe. The seating capacity was increased to 54,000 for baseball and 65,000 for football. In 1970 a digital scoreboard replaced the original “Gunther” scoreboard and wooden benches that covered the entire second deck were replaced by chairs and metal benches.

Memorial Stadium was a great place to watch a baseball game, but an terrible place to watch football. It was the home of the Baltimore Colts from 1953 until 1983. During football season, the field was laid out so the upper deck extended sixty yards from the end zone of the horseshoe, past the 50-yard line to the 40-yard line where it ended on both sides. Not only were quality seats missing, but along with the obstructed seating, the “horseshoe” shape of the stadium was terrible for football, because the 40-50 yard line seats actually took fans away from the field. The Colts moved to Indianapolis after the 1984 season and the Orioles were left as the only tenant at the stadium. In 1985, a $2.9 million Diamond Vision video board was added in left center field. Memorial Stadium offered beautiful views of the landscape beyond the open-end of the stadium. In 1988 the Orioles announced plans to build a new ballpark in downtown Baltimore. On October 6, 1991 a sellout crowd saw the Orioles fall to the Detroit Tigers in the last game at Memorial Stadium. The following season the team moved into Camden Yards. After the Orioles left a minor league team played at Memorial Stadium for one year. In 1996 professional football returned to Baltimore and Memorial Stadium as the Cleveland Browns relocated to the city. The Baltimore Ravens played two seasons at the stadium as a new football stadium was built near Camden Yards. Memorial Stadium sat empty until 2001 when it was demolished. The Cal Ripken Senior Youth Development Field, a baseball/football field is on the same location that Memorial Stadium’s field was located. Apartment complexes surround the field. 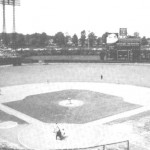 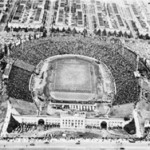 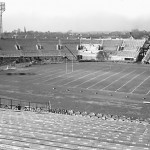 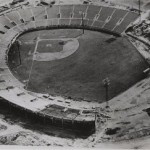 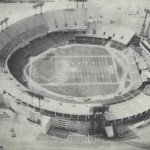 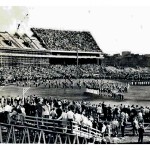 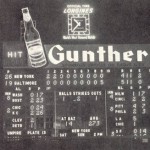 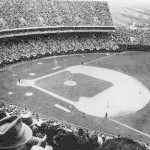 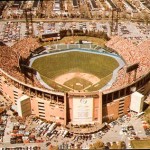 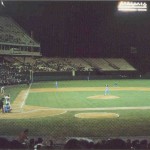 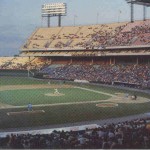 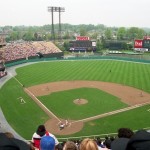 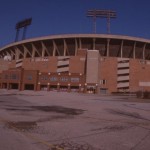 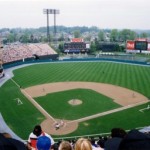 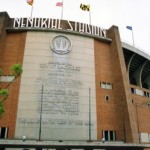 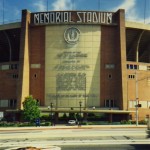 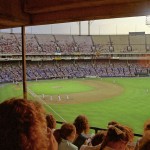 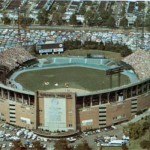 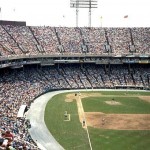 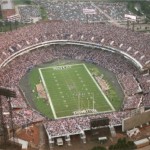 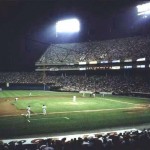 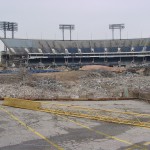 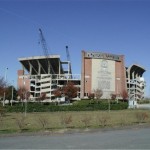 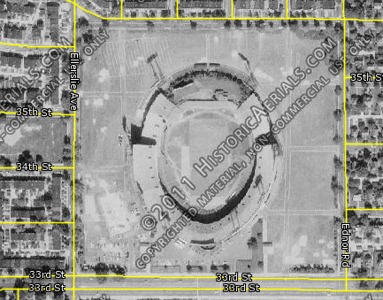 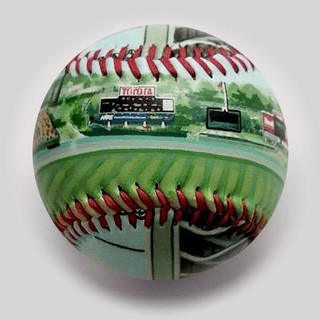