When talking about Colt Stadium, Colt .45’s player Rusty Staub described tit as any other player at the time would, “I don’t care what ballpark they ever talk about as being the hottest place on the face of the Earth, Colt Stadium was it.” Both players and fans spent three seasons in the heat at Colt Stadium before moving to the Astrodome in 1965. When MLB awarded Houston a National League franchise in 1960, the team needed a home until a planned dome stadium could be built. They decided to construct a temporary stadium until the dome stadium was built, a 33,000 seat, one tier ballpark. Named Colt Stadium, the Colt 45s played their first game at the stadium on April 10, 1962. One tier of multicolored seats and bleachers extended from the right field foul pole to home plate and around to the left field foul pole. Additional seating was located in both right and left field. The scoreboard made up part of the centerfield wall. Colt Stadium was an awful place for baseball. The temperature was always hot, even at night and mosquitoes were terrible. During a doubleheader one Sunday, over 100 fans were sent to the first aid room at Colt Stadium. While the Colts .45s played at Colt Stadium, their new dome stadium, the Astrodome, was constructed beyond the first base grandstand. On September 27, 1964 the Colt .45s played their last game at Colt Stadium against the Los Angeles Dodgers. In 1965, the Colts .45s were renamed the Astros and moved across the parking lot into the Astrodome. Colt Stadium remained standing for five years after the Colt .45s left as it served mainly as a storage yard. Team owner Roy Hofheinz had the entire stadium painted grey so it would not stand out in aerial photos of the Astrodome. In the late 1960s Colt Stadium was sold to a minor league Mexican team for $100,000. The stadium was disassembled and moved to Torreon, Mexico. The stadium was moved once again to Tampico, Mexico where it stills sits today and is part of a public playground. 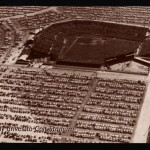 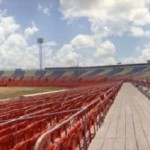 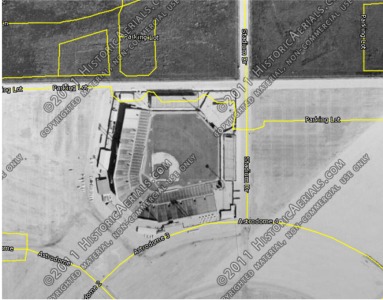