Name the MLB stadium where you had a great chance of seeing snow falling while baseball is being played and where you can sit 600 feet away from homeplate. If you guessed Exhibition Stadium in Toronto, you are correct! Before the Blue Jays landed in Toronto, minor league baseball was played in the city between 1896 and 1967. Not to be confused with hockey’s Toronto Maple Leafs, the Minor League Baseball franchise, Maple Leafs played at Maple Leaf Stadium from 1908 to 1967. In the late 1950s and early 1960s Maple Leaf’s owner Jack Kent Cooke tired to get Toronto to construct a new ballpark in an effort to lure a MLB team to the city. That effort failed and the Maple Leaf’s franchise was bought and moved to Louisville, KY after the 1967 season.

In an effort to attract a MLB franchise to the City of Toronto, a $15 million bond was approved to enlarge CNE (Canadian National Exhibition) Stadium in 1974. In 1976 the San Francisco Giants nearly moved to Toronto after local investors purchased the team. However, the newly elected San Francisco major and capital kept the team in San Francisco. The following year Major League Baseball awarded Toronto an expansion franchise, the Blue Jays. Snow covered the field when the Toronto Blue Jays played their first game at Exhibition Stadium on April 7, 1977 against the Chicago White Sox. After the stadium was reconfigured for baseball it still looked primarily like a football stadium. The original grandstand was constructed on the north side of the stadium in 1948 and had a capacity of 20,000. This section of seating formed the nucleus of the facility. The original north grandstand was revamped, the south stands were replaced and a new section of seats were added between the north and south stands to create a baseball field prior to the start of the 1977 season. A stadium club and VIP boxes were also constructed. The main covered  grandstand became part of the left field. A 12 foot fence formed the outfield wall that began at the left field foul pole and then curved across the AstroTurf field at the 40 yard line. A large open area was behind the right field fence. The scoreboard was located on the far end past the right field fence.

Although the Blue Jays were a lackluster team in 1977, they drew over 1.7 million fans in their inaugural first season. After over 30 years of talk of building a dome stadium in Toronto, a site was chosen and construction began on a retractable roof stadium in 1986. The Blue Jays played their last game at Exhibition Stadium on May 28, 1989 and moved into their new home, the SkyDome, on June 5, 1989. Exhibition Stadium remained standing until 1999 when it was demolished. 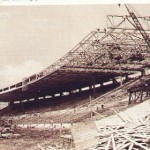 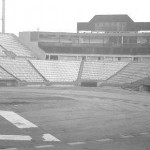 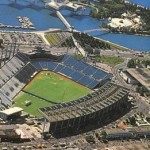 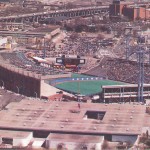 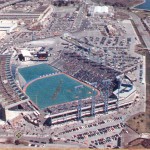 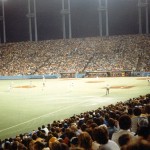 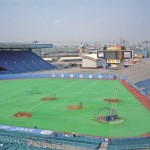 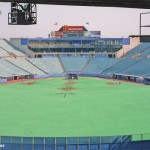 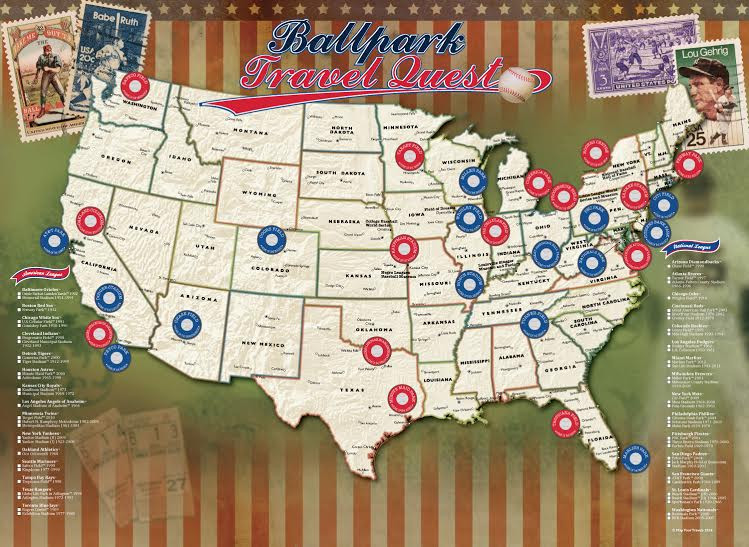