While some Twins fans remember baseball games outdoors at Metropolitan Stadium, most can recall Twins games from inside at the Metrodome. With the opening of Target Field in April 2010, Twins fans, old or young, can now watch baseball outside. The battle to build Target Field lasted over a decade, as the Twins struggled to receive funding for construction from the State of Minnesota. Talks of contracting the team by MLB, relocation and passionate support from fans finally led state legislature to approve financing of a new $545 million ballpark in May 2006. Under the State of Minnesota’s authorizing legislation, the county’s share of financing the ballpark was $350 million. This covered construction and infrastructure costs. The Twins organization contributed checks totaling nearly $195 million. Nearly one year after state approval, the Twins officially unveiled plans for their new ballpark. On September 15, 2008, the Twins announced they had reached an agreement with the Target Corporation to name the ballpark Target Field. Financial terms were not released, but the partnership lasts for 25 years. 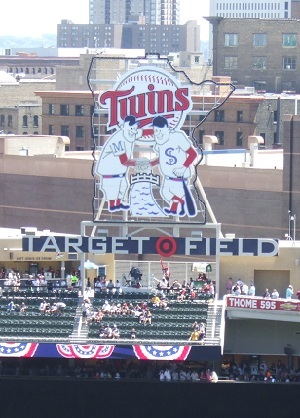 The Minnesota Twins played and won their field game at Target Field against the Boston Red Sox on April 12, 2010. Target Field is located in downtown Minneapolis, in the Warehouse District. The ballpark reflects Minnesota’s dynamic blend of urban sophistication and outdoor vitality. The facade consists of Minnesota limestone and a canopy covers much of the upper deck seating. Most Twins fans enter the ballpark through Target Plaza, a park-like gathering area located outside the right field entrance gate. This landscaped area features a 1,500 pound bronze glove, player statues of Harmon Killebrew, Rod Carew, and Kirby Puckett; a wall tribute to Minnesota ballparks, and the Metropolitan Stadium flagpole. Once inside Target Field, it is apparent that it is one of the best ballparks in baseball. Target Field features just under 40,000 seats, 18,500 seats in the lower deck, with the main three tier grandstand extending from the right field foul pole to home plate and to the left field foul pole. Between the upper and lower decks are 4,000 club seats, 60 luxury suites and the pressbox. A double decked grandstand is located in left field with additional seating in right field. Located in the northwest corner of the ballpark is the Budweiser Roof Deck that features a fire pit, bar, 150 bleacher seats and standing room for 150 fans. It provides fans with views of the Minneapolis skyline and Target Field. Additional gathering locations for fans to grab food and beverages include the Legends Club Lounge, located on the club level that pays tribute to Twins Hall of Famers, the Met Club, open to all season ticket holders that is located down the right field line and the Town Ball Tavern, a celebration of Minnesota amateur baseball that is open to all fans. Themed concessions also located throughout Target Field include the Taste of Twins territory, Hennepin Grille, Senor Smokes and Frankie V’s Italian.

One of the most unique features at Target Field is the homerun celebration feature. Located in centerfield, this large feature is the Twins original “Shaking Hands” logo from 1961-1981. Twins characters, Minnie and Paul light up when a Twins player hits a homerun. Open air concourses throughout the ballpark, twice as large as the ones at the Metrodome, allows fans never to miss a single pitch of the game. All fans throughout the entire main grandstand have a spectacular view of downtown Minneapolis. The main scoreboard is located in left centerfield. Target Field features multiple “Knotholes” along the 5th Street side of the ballpark, allowing fans to watch the action from outside the park without buying a ticket. The Twins are committed to providing a comfortable experience for fans, even on days when the weather is less than perfect. Fans can take advantage of heated concessions, restrooms, restaurant and lounge areas found on each ballpark level. In addition, the ballpark’s sun screen, one of the largest in baseball, provides added protection. Access to the ballpark is easy with 20,000 parking spaces within a block of the ballpark and a light rail stop directly at the ballpark. The Twins were able to carry over their success from the Metrodome as they won the 2010 American League Central Division Championship during their first season at Target Field. Both the Twins and fans hope to bring a World Championship back to Minnesota within the coming years. Before the start of the of 2011 season, the Twins added a 28 feet high by 50 feet wide video display board above the right field grandstand. A 100 feet high LED-illuminated Twins Tower stands adjacent to the video board. Before the start of the 2016 season the Twins reconfigured the centerfield seating area into a multi-level fan gathering space. This two level area, directly below the Minnie and Paul figures in centerfield, features a Twins-themed pub with Minnesota-branded food options on the upper level. The lower level area, named CATCH is a premium space for 120 season ticket members. Both areas will provide amazing views of the ballpark. 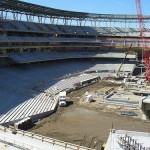 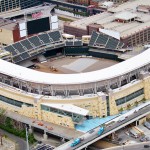 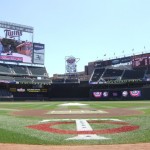 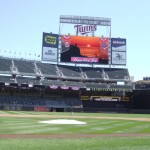 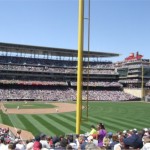 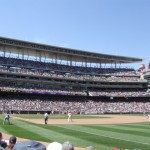 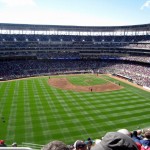 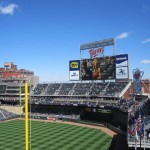 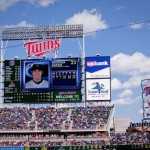 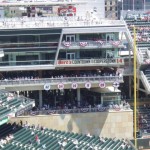 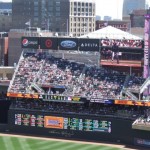 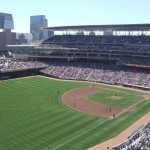 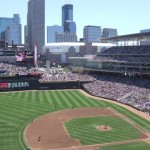 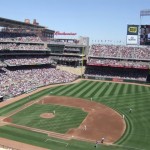 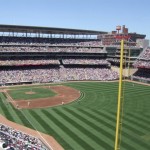 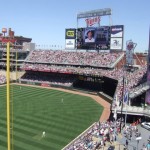 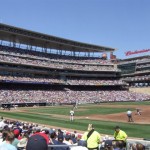 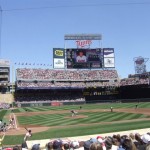 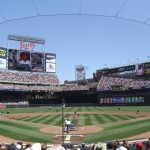 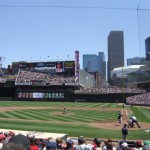 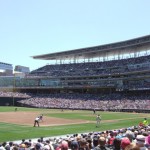 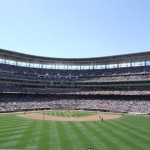 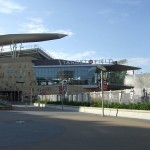 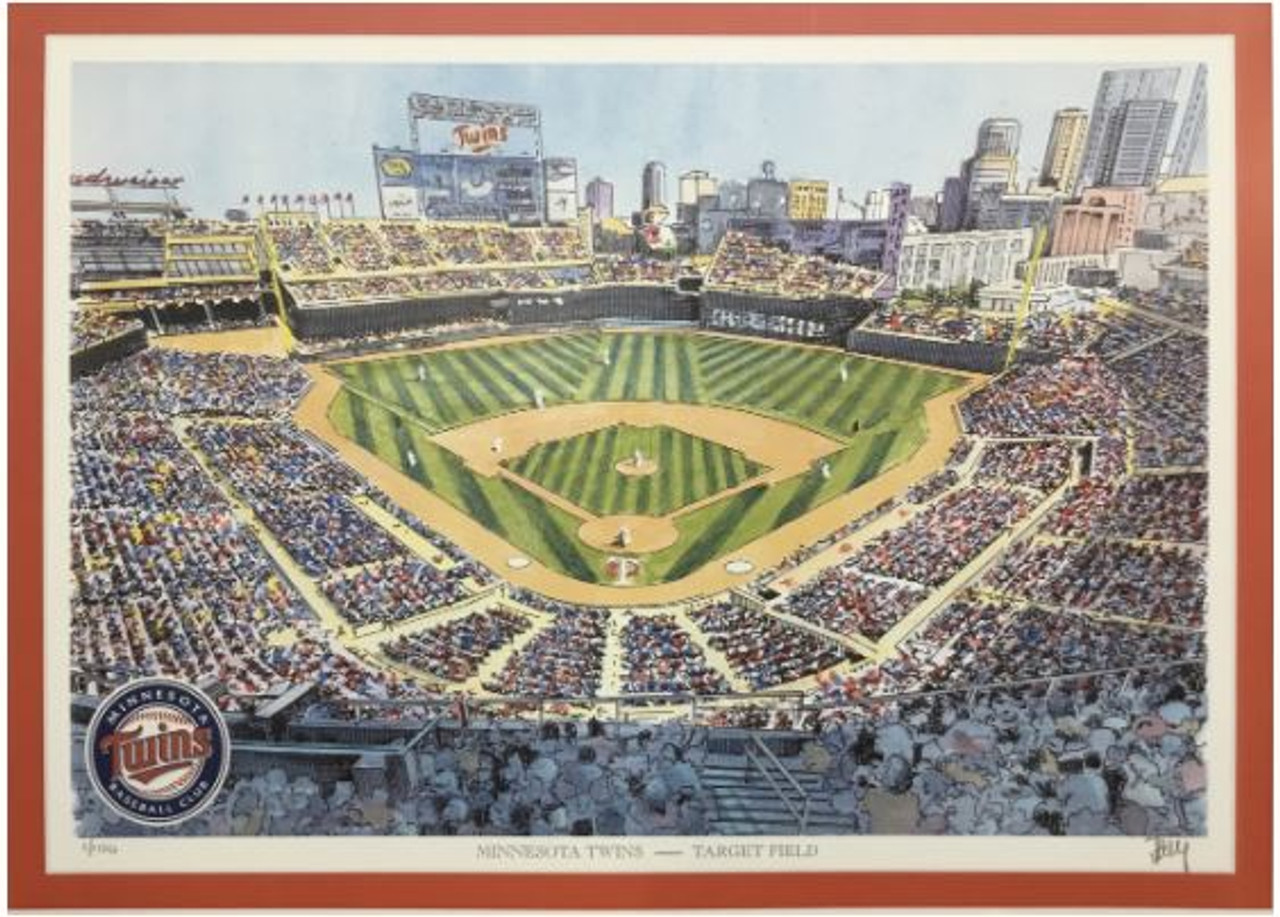 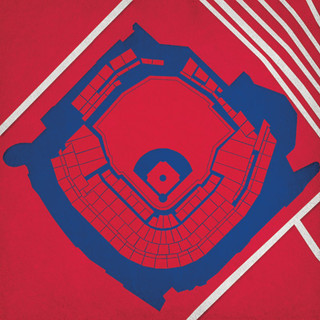 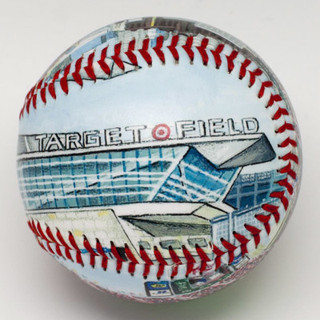 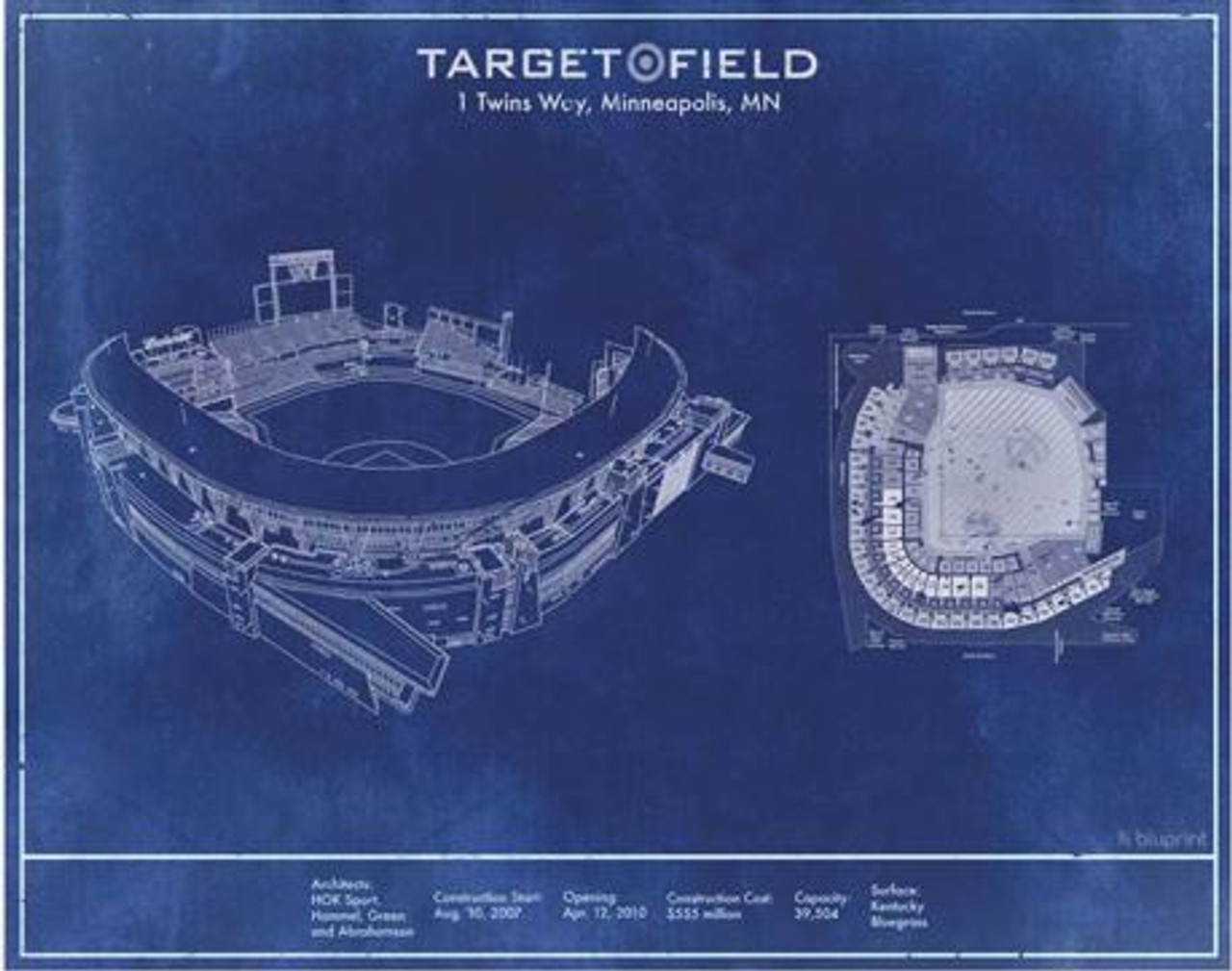