Ballparks today have attractions such as a ferris wheel at Comerica Park and a swimming pool in the outfield at Chase Field, but Municipal Stadium in Kansas City had some of the most unusual attractions of any baseball stadium: a petting zoo and a mechanical rabbit. The ballpark that eventually became Kansas City Municipal Stadium originated in the 1920s. George Muehlebach purchased the minor league Kansas City Blues and constructed a $400,000 stadium for them in 1923. The single tier grandstand had a seating capacity of 17,000 and officially opened on July 3, 1923. Originally known as Muehlebach Field, it was renamed Ruppert Stadium in 1937 when the New York Yankees owner Colonel Jacob Ruppert purchased the Blues and the stadium. Four years later after Ruppert’s death the ballpark was renamed Blues Stadium.

In the 1950s the landscape of Major League Baseball shifted as the Boston Braves moved to Milwaukee and the St. Louis Browns moved to Baltimore. Throughout the 1940s and early 1950s the Philadelphia A’s were struggling to attract fans to Connie Mack Stadium as the Philadelphia Phillies became the more popular baseball team in the city. Coupled with the fact that the Connie Mack family who owned the A’s were struggling to financially operate the team led to the sale of the Athletics. In 1953, Chicago businessman Arnold Johnson purchased Yankee Stadium and Blues Stadium. One year later Johnson purchased the A’s and moved them to Kansas City. He was forced by the league to sell Yankee Stadium and sold Blue Stadium to Kansas City which renamed the facility Municipal Stadium. In Summer 1954 Kansas City passed a bond to expand Blues Stadium and in January 1955 the stadium was reconstructed. The grandstand was double decked from homeplate to the right field foul pole and down the third base line. A lower level grandstand extended to the left field foul pole and bleachers were in right field. The scoreboard, bought from Braves Field in Boston was beyond centerfield. The Kansas City Athletics played their first game here on April 12, 1955 in front of over 30,000 fans.

Charlie O. Finley purchased the A’s after the death of Arnold Johnson in December 1960. In an effort to copy the dimensions of the short 296 foot right field fence at Yankee Stadium, Finley added a section of bleachers called, “Pennants Porch” in right field before the start of the 1964. However, MLB vetoed this option and the fence was moved to the league minimum, 325 feet and renamed, “One-Half Pennant Porch.” Kansas City Municipal Stadium had several unique and quirky features. A small zoo and picnic area was behind the right-field fence that housed the team mascot, a mule named “Charlie O”. A mechanical rabbit, named “Harvey” rose out of the ground with new baseballs for the umpire and a compressed-air device blew dirt off homeplate.

In the early 1960s Finley began looking to move the A’s to a new city. He attempted to move the team to Dallas, Louisville and Oakland by 1965. Although Kansas City approved construction of a new baseball only stadium in 1967, after the season the American League approved the move of the Athletics to Oakland and to there new stadium, the Oakland Coliseum. Professional baseball was gone from Kansas City for one season until the expansion Kansas City Royals began playing at Municipal Stadium in 1969. The Royals played four seasons here, playing their last game on October 4, 1972 and moving to Kauffman Stadium the following season. Not only was Municipal Stadium home to the Athletics and Royals, but the Kansas City Monarchs, one of the most successful Negro League franchises from 1923-1931 and 1937-1954. It was also the home of the Kansas City Chiefs football team from 1963 to 1971. The gridiron at Municipal Stadium extended over the baseball diamond into right-centerfield. Portable bleachers were placed in left field. Kansas City Municipal Stadium was demolished in 1976 and has recently been redeveloped into a single family housing neighborhood. 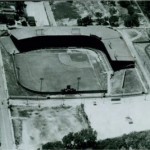 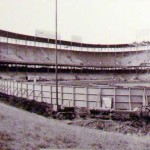 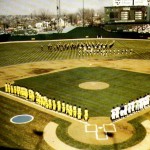 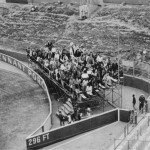 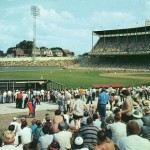 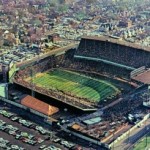 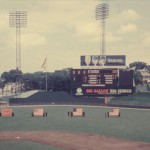 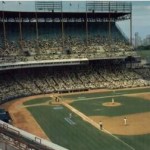 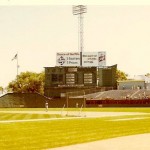 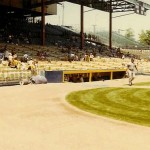 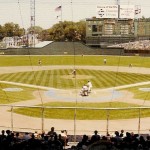 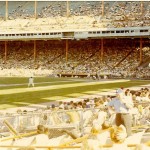 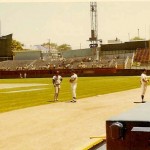 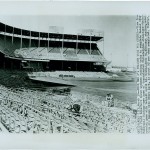 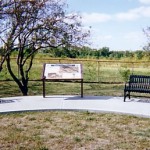 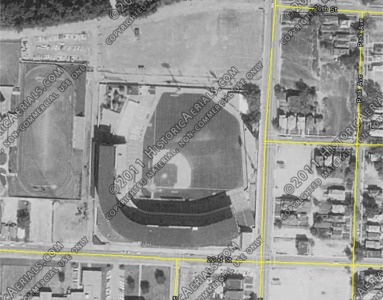