Located in North Philadelphia and opening in 1909 as the home of the Philadelphia Athletics, Shibe Park’s innovation influenced baseball and the next wave of ballparks, setting the standard for future ballparks built in the 20th century. The history of the Athletics began in 1901 when the team became a charter member of the  American League as a second team was established in Philadelphia to compete with the Phillies. On April 26, 1901 the Athletics made their debut in Philadelphia at Columbia Park as they battled Washington. Located at 30th and Oxford Streets, this small wooden ballpark had a seating capacity of 9,500 with a single tier grandstand stretching around the bases. The capacity later increased to 13,500 with the addition of seating in the outfield. The A’s were very popular and successful as they won the American League Championship in 1902 and 1905. Because of the team’s popularity a new ballpark was needed, leading owner Ben Shibe to construct a new ballpark. The most modern ballpark in baseball was already in Philadelphia, the Baker Bowl, home to the Phillies. In 1907 Shibe purchased a six acre site in North Philadelphia to build a ballpark. It was designed by Shibe and manger Connie Mack. Construction began in 1908 and was built of entirely of steel and concrete. The A’s played their last game at Columbia Park on October 3, 1908 and moved a mile northeast the following year. The new A’s ballpark was named after Shibe, thus getting the name Shibe Park. Completed at a cost of $300,000 the ballpark took only about a year to be constructed.

On April 12, 1909 the Athletics made their debut at Shibe Park, in a victory over the Boston Red Sox. Fans entering the ballpark through the homeplate entrance of Shibe Park, saw one of the most grandest facades at any ballpark ever built. An octagonal Beaux Arts tower was at the main entrance, housed a lobby and offices for team executives. The grandstand walls featured a very impressive French Renaissance facade consisting of brick and arches. Inside, the ballpark had a seating capacity of 23,000, consisting of a double decked grandstand from behind home plate down to the first and third bases. The lower grandstand extended down the lines and bleachers were in left field.  The capacity could be increased by 10,000 by allowing fans to stand in an area in deep centerfield. In right field there was a wall 12 feet high. However, buildings across the street allowed fans to watch the game for free from rooftops. The original dimensions at Shibe Park were 378 ft. (left), 340 (right), and 515 ft. (center) because the ballpark was built where very few buildings existed.

The Athletics were very successful upon moving into Shibe Park as they won the World Series in 1910, ’11 and ’13. This success led to the first of several expansions at Shibe Park. In 1913 permanent seating was added in left field. The largest expansion occurred in 1925 when the all of the remaining grandstands not double decked, were, and the main grandstand was rebuilt. A mezzanine was added in 1929 and 1930 bringing the capacity to 35,000.

Until 1935, fans sitting atop the building roofs behind the 12 foot right field wall could watch the game for cheaper prices than admission to Shibe Park. This was not a huge concern to ownership until the early and mid 1930s. Due to the Great Depression and A’s lack of success, attendance decreased at Shibe Park and also hurt the rooftop owners who sold seats to games. During this time, rooftop owners sent individuals to outside the Shibe Park ticket windows to sell tickets to their rooftop seats at a cheaper price. This led the A’s to raise the right field fence to 50 feet before the 1935 season . Nicknamed the “spite fence” the right field fence blocked all views from the neighboring houses.

In 1936 Connie Mack took control of ownership and controversy with the neighborhood began again. After the 1938 season Mack wanted to install lights at the ballpark. The neighborhood objected as they were concerned with the light, noise and traffic night baseball would lead to. However, the Athletics installed lights and the first night game played at Shibe Park was on May 16, 1939. A second tenant moved into Shibe Park in 1938 when the Philadelphia Phillies moved three blocks west from the aging Baker Bowl to Shibe Park on July 4, 1938. The NFL’s Philadelphia Eagles moved to Shibe Park in 1940 giving the ballpark three tenants. The Eagles played at Shibe Park until 1958 when they moved to Franklin Field. A fan living in the Philadelphia area could go to a baseball game everyday from April to September because one team was always in town.

In 1941 the A’s installed a new, larger scoreboard in right centerfield, replacing the existing one. Three years later, in 1944, the club spent $1 million adding 3,000 seats down the first and third base lines, replacing stairs with ramps, adding a restaurant and installed a new pressbox. From the second deck of Shibe Park fans could enjoy views of the nearby neighborhood and were able to see the scoreboard in right centerfield. Advertisements were banned from the ballpark until 1955, but then were plastered on the outfield walls and on top of the grandstand roof in left field. Shibe Park was renamed Connie Mack Stadium in 1953 after the manager of the A’s for 50 years. The A’s moved to Kansas City after the 1954 season and the Phillies bought the stadium for $1.675 million. The original scoreboard was replaced by a 60 foot high scoreboard and a plexiglass shield was installed to protect fans seated behind home plate, replacing the standard wire screen. 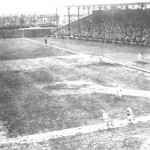 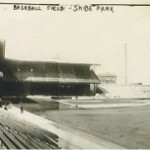 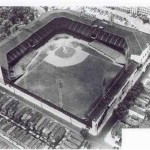 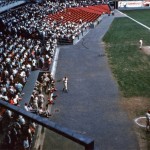 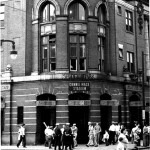 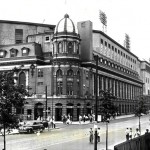 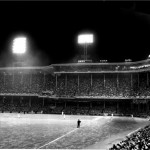 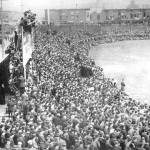 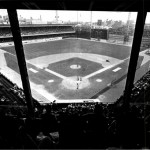 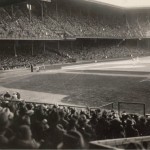 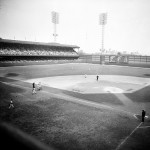 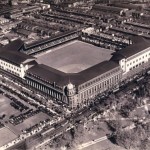 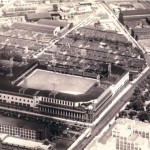 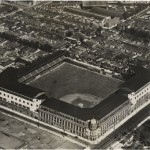 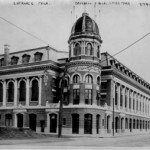 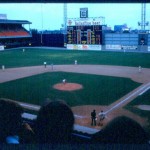 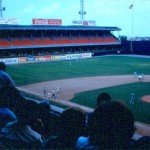 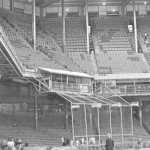 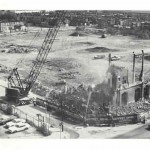 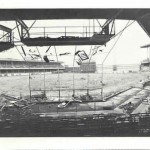 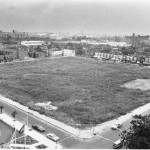 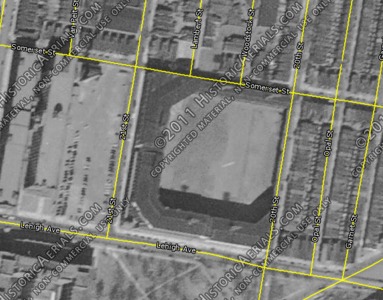 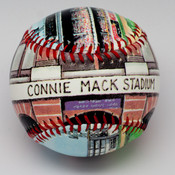 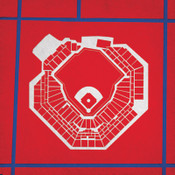