In the early 1980s Jerry Reinsdorf and Eddie Einhorn purchased the White Sox and began looking to replace Comiskey Park. Throughout the 1980s architects and club officials worked together to develop the best concepts for a new stadium. As early as 1985 the City of Chicago and the White Sox began discussing locations for a new ballpark. The city offered a location for a 50,000 seat stadium at Roosevelt Road along the Chicago River. In December 1986, the White Sox proposed building a ballpark in a west suburban Addison location. A site next to Comiskey Park was also a possibility. Studies were also conducted by the White Sox Stadium Authority to renovate Comiskey Park. However, this was determined to be too expensive and the team preferred a new ballpark.

Voters rejected ballot measures to fund a new stadium leading the White Sox to threaten to move to Tampa, FL. However, Illinois Governor James R. Thompson was able to secure funding to keep the White Sox in Chicago. A site adjacent to Comiskey Park was chosen for the new ballpark and construction began May 7, 1989. Throughout the 1989 and 1990 seasons the new concrete and steel ballpark towered over Comiskey Park as it was being constructed. Completed in two years, it was named after its predecessor, Comiskey Park. Naming rights to the ballpark were sold to US Cellular in 2003 and the ballpark was known as US Cellular Field for 13 seasons. In November 2016 the ballpark was renamed Guaranteed Rate Field after the team signed a 13-year naming rights deal with the retail mortgage lender.

Opening day was on April 18, 1991, when Governor Thompson threw the ceremonial first pitch as the White Sox battled the Detroit Tigers. Over 42,000 fans filled Guaranteed Rate Field’s blue seats that day. The home of the White Sox was no longer a cozy, intimate ballpark, but an expansive stadium featuring a three tier grandstand from foul pole to foul pole with lower deck seats extending into the outfield. The upper deck was no longer close to the field as it was with the low-raked upper deck at the old Comiskey Park. It was expansive and steep that led to lots of negative publicity. The new ballpark had little charm or characteristics that its predecessor had. This became even more apparent in 1992 when Camden Yards opened in Baltimore with its retro design that nearly every ballpark since has been patterned after.

With all the retro ballparks built after the construction of Guaranteed Rate Field in 1991, the team decided to improve and enhance the stadium to give it a retro appearance to attract more fans to games. The White Sox unveiled plans to renovate the ballpark after the 2000 season. Several rows of seats were added along the foul lines, the bullpens were relocated, a two-tier outdoor terrace area for the Bullpen Sports Bar was created and the outfield seating area was extended down to the fence in several sections. Renovations continued after the 2001 season that included a new multi-tiered batter’s eye in center field, a vertical screen behind home plate, improvements to the main concourse and upgrading the club level.

In 2003 with the additional revenue generated by selling the naming rights to US Cellular the White Sox continued to renovate the ballpark. After the 2003 season the White Sox embarked on the biggest renovation project by demolishing eight rows from the top of the upper deck eliminating 6,600 seats and lowering the height of the ballpark. A flat roof was installed, covering two-thirds of the upper deck and enclosing the upper deck concourse. A translucent wall connects the roof to provide further protection from the weather and offers a distinctive look to the park. After the 2004 season, a section of seating behind homeplate in the lower deck was removed and replaced with new luxury seats. Throughout the 2005 and 2006 seasons all of the ballpark’s original blue seats were removed and replaced with dark green seats giving the ballpark its present-day appearance.

In September 2015 the White Sox announced they would upgrade the video/scoreboards at Guaranteed Rate Field. The $7.3 million renovation plan included replacing the existing video and scoreboards in left, center and right field. The main videboard in centerfield was replaced with a new 7,000 to 8,000 square feet HD videoboard. New 2,500 square feet videoboards replaced the existing ones in left and right field. This project was completed by Opening Day 2016.

Today fans from all over Chicago travel to Guaranteed Rate Field to watch the White Sox play. Numerous parking lots surround the stadium and the CTA red line train makes a stop at Sox/35th, providing public transportation to the stadium. Once inside Guaranteed Rate Field, fans must go up either ramps or escalators to access any of the four main levels of the stadium. Four levels of seats extend from behind homeplate to both foul poles. Included on two levels, are 85 private suites and four party suites. A two tier stadium club restaurant is located down the right field line. Bleacher seats stretch across the outfield, except in straightaway centerfield. A replica of the old park’s famous exploding scoreboard, first conceived by Bill Veeck, is located over the centerfield bleachers. Numerous amenities can be found at Guaranteed Rate Field They include the multilevel interactive FUNdamentals skills deck in left field, and the two level fan deck in center field, providing a panoramic view of the playing field. There are many great locations throughout the outfield concourse for fans to mingle or to check out statues of great White Sox players including Frank Thomas, Nellie Fox, Harold Baines and several others. One of the most popular areas in the summer is the Rain Room where a cool mist relieves the summertime heat. There have been several memorable games at Guaranteed Rate Field throughout its history, but none greater than the first two games of the 2005 World Series, the first World Series games in Chicago since 1959. 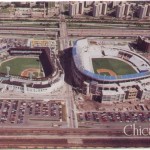 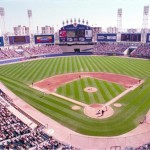 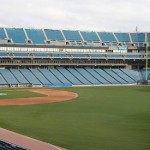 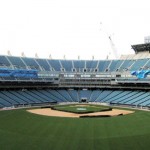 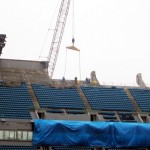 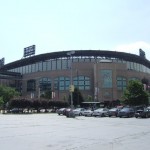 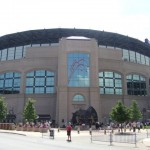 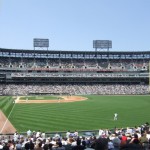 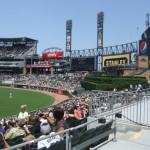 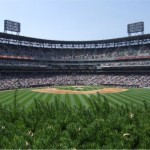 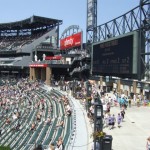 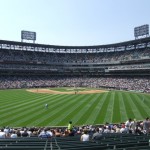 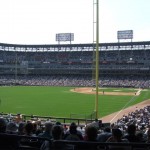 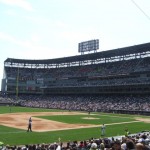 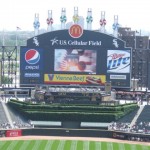 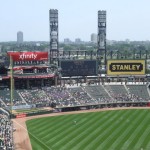 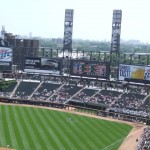 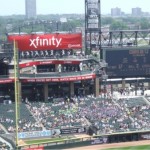 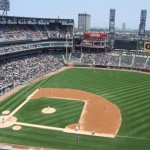 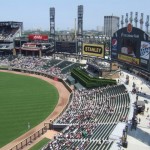 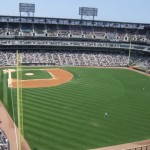 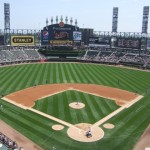 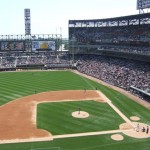 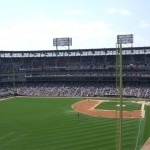 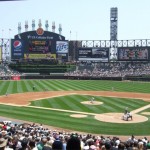 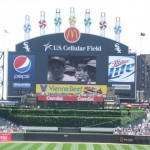 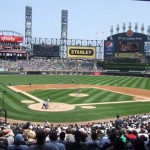 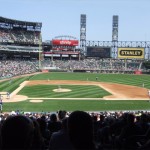 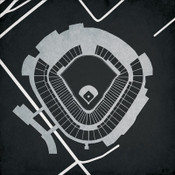