The 2016 season marked the last year the Braves called Turner Field home before moving north of Atlanta to a new ballpark in 2017. During the late 1980s the Braves began pursuing a new ballpark to replace the multipurpose Atlanta Fulton County Stadium and the city of Atlanta began to via for the Summer Olympics. In 1990 the International Olympic Committee announced that Atlanta would host the 1996 Olympics Games leading the city and Braves to join forces in building a stadium. The stadium would first host the Olympics and then be converted to a baseball only facility. A site just south of Atlanta Fulton County Stadium, on city owned land was chosen to construct the stadium. Plans for the facility were unveiled in November 1992 and construction began in July 1993. The ballpark was built and shaped for the purpose of baseball. The exterior is brick and limestone, similar to other ballparks. Temporary bleachers were built beyond the outfield fence to allow for a larger capacity for the Olympic games. After the Olympics ended, the stadium was retro-fitted and converted to a baseball only stadium.

On April 4, 1997, 50,096 fans watched the Braves play their first game the state of the art ballpark. The stadium was named Turner Field after then Braves owner Ted Turner. Upon arriving at Turner Field, many fans parked north of the ballpark, beyond the outfield stands. Walking towards the ballpark, fans passed over the former site of Atlanta Fulton County Stadium. The base paths and playing field was marked out in what is now a parking lot, and part of the retaining wall of Atlanta Fulton County Stadium remains. As fans approached the ballpark they could see the brick and limestone walls of Turner Field and the blue seats in the upper deck. Although there were many entrances around the ballpark, most fans entered through the Grand Entry Plaza. Inside this area included entertainment and concession areas of food and game filled pavilions, Scouts Alley and Tooner Field. A 100 foot diameter photograph of Hank Aaron’s 715th homerun ball dominated the Plaza side scoreboard. Adjacent to the plaza was the Braves Hall of Fame and Monument Grove.

Upon entering the ballpark fans were on the field level. Ramps, stairs, and escalators throughout Turner Field took fans to the terrace level, the Lexus level and the upper deck. The field level seating section extended from the left field foul pole around to home plate and to the right field foul pole. Additional seating was located in left field and in parts of right field. The Braves bullpen was located between the field pavilion seats in right field and the opposing team’s bullpen beyond the left field foul pole. Fans could walk the entire lower concourse and never loose site of the action on the field and could watch pitchers warm up in the bullpen. The next level up, the Lexus level, extended from right field to the right field foul pole around to home plate, and down and around the left field foul pole to the 755 restaurant. Not only was this a suite area, but also an area where fans could purchase individual tickets for games. Perhaps the best part of this level was the air conditioned concourse. The upper deck extended from right field to the foul pole and around to home plate and down the third base line. From the concourse fans could see the surrounding neighborhood and the Atlanta skyline. The upper level concourse extended from behind the upper deck down the third base side into left field where the Coca-Cola Sky Field was located. This area featured picnic tables, views of the stadium and the city of Atlanta, and a 38 foot tall Coke bottle. The 80ft by 72ft high definition video board, added before the 2005 season, was located above the hitters backdrop in centerfield.

Monument Grove was located in the Grand Plaza Entrance and included statues of Hank Aaron, Phil Niekro, Ty Cobb, and many other Braves greats. Trees, park benches, and a picnic area were also located in this area. The Braves Chop House, an 8,000 square foot dinning restaurant, was located above the Braves bullpen, allowing fans to dine during the game. Prior to the start of the 2005 season, the Braves spent $15 million improving Turner Field. This included a new high definition video/scoreboard, ribbon boards along the upper deck and a new restaurant was constructed in right field. After the 2007 season, 158 seats were added directly behind homeplate that were only 43 feet from the action. These were the most expensive seats at the ballpark and had access to a 5,000 square foot lounge adjacent to the Braves clubhouse.

In November 2014 the Atlanta Braves announced plans to build a new stadium, Truist Park, in Cobb County. The team’s 20 year lease ended at Turner Field following the 2016 season allowing the Braves to move. Team officials stated Turner Field would require at least $150 million in infrastructure work, new seats and other work to remain a viable option for the Braves.  The Braves played their final game at Turner Field on October 2, 2016, a 1-0 victory over the Detroit Tigers.

The Atlanta Fulton County Recreation board announced in December 2015 that Georgia State purchased the stadium and parking lots. Turner Field was renovated, remaking the facility into a 25,000 seat stadium, and opened for the 2017 Panthers football season as Georgia State Stadium. 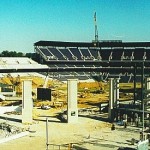 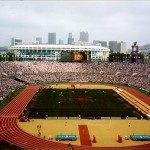 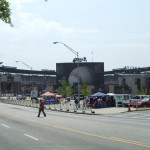 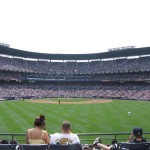 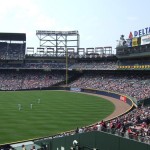 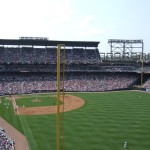 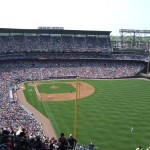 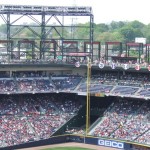 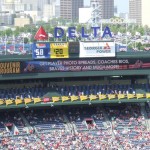 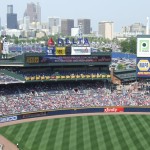 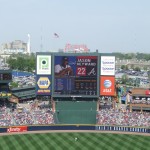 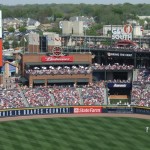 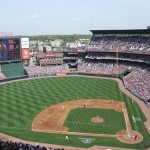 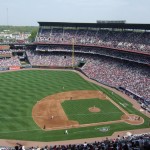 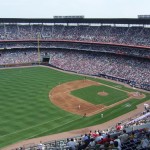 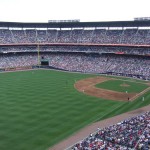 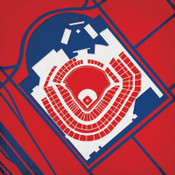 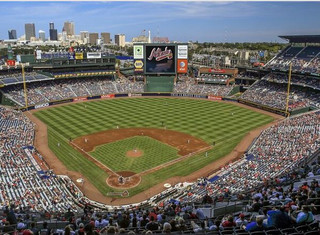