It may be the fourth oldest ballpark in the American League, but unlike every other stadium built in the 1960s and 1970s the home of the Royals has remained one of the most picturesque ballparks in baseball. Opening in 1973 it broke from the sports stadium trend of the past decade when cities across the country were building dual multiple purpose stadiums for their professional baseball and football teams. Pro baseball arrived in Kansas City when the Philadelphia Athletics moved to the city and Kansas City Municipal Stadium in 1955. Originally constructed as a minor league ballpark in 1923 it was enlarged for the A’s. By the start of the 1960s A’s owner Charlie Finley was unhappy with the stadium and began exploring options to move to a new city. In order to keep the A’s in Kansas City, the Jackson County Sports Complex Authority was established to acquire land, design and construct a new sports complex for the A’s and the Kansas City Chiefs (NFL). Original plans were for a multi-purpose stadium but was scrapped due to the design and seating capacity issues. Instead the county decided to built two structures adjacent to each other, one for the A’s and one for the Chiefs. In June 1967, a $102 million bond was issued for construction. However, Charlie Finley was unwilling to wait to have a new stadium constructed and moved the A’s to Oakland, CA in October 1967.

After the A’s departure, United States Senator Stuart Symington demanded a new franchise for Kansas City or he would introduce legislation to remove baseball’s antitrust exemption. During baseball’s winter meetings in 1967, MLB decided to expand by four teams that would begin playing in 1971. Kansas City was granted a franchise, the Royals. However, pressure from Symington and other officials forced MLB to allow the expansion franchises to begin playing in 1969.

Construction on the Truman Sports Complex that included the Royals stadium and the Chiefs stadium, Arrowhead Stadium, began on July 11, 1968. Originally known as Royals Stadium, the Royals played their first game at the stadium on April 10, 1973. The stadium originally had a seating capacity of 40,793 gold and orange seats. The three tier seat deck stretched from the right field foul pole down and around homeplate to the left field foul pole. All of the seats faced second base and there was no seating in the outfield. Both ends of the upper deck tapered to a single row near the foul poles. It was the American League’s first ballpark with Astroturf as the playing surface. The most unique feature at the stadium are the water fountains beyond the outfield fence as Kansas City is known as the City of Fountains. The fountains stretch 322 feet horizontally and have a 10 foot high waterfall that descends from an upper cascade pool that serves as a background for two water fountain pools. A 12-story scoreboard, in the shape of the Royals’ crest is located beyond the centerfield fence.

Until the 1990s there were few changes to the stadium. In 1990, a 30-by-40 foot Sony JumboTron video board was installed in left-center field. The stadium was renamed in honor of Ewing Kauffman in 1993 and two seasons later the Astroturf was replaced with grass. After the 1998 season Kauffman Stadium was given a full makeover. The stadium renovation project included the addition of Crown Seats, Dugout Suites, new clubhouses and an exclusive restaurant and lounge known as the Crown Club. All of the orange and gold seats throughout the stadium were replaced by blue seats.

In an effort to maintain its status as one of the best stadiums in the big leagues, the Royals announced in 2007 that they would embark on a two-year, $256 million renovation to Kauffman Stadium. Phase I of the renovation project completed by Opening Day 2008 included new bullpens perpendicular to the field, expansion of the seating in the Crown Club and Dugout Suites, and a LED scoreboard in the left field wall. The most apparent change was the replacement of the original crown scoreboard in centerfield with a new 150′ by 40′ high-definition videoboard. Renovation work continued to the dugout level concourse, exterior work to widen concourses on all levels and on the outfield plaza to connect the entire ballpark. The renovation project was completed by Opening Day 2009. Additional improvements to Kauffman Stadium included new fountain view terrace seats in the outfield, widened concourses on all three levels and an outfield concourse that allows fans to walk 360 degrees around the stadium. There are a host of attractions for fans to check out when visiting Royals Stadium. This includes a kids’ area known as “the Little K,” the Taste of KC, a right field sports bar themed restaurant, and the Royals Hall of Fame in left field. Kauffman Stadium’s seating capacity is now 37,903 due to all of the renovation projects.

Today, fans from Missouri, Kansas and other states come to Kauffman Stadium to enjoy Kansas City Royals baseball, views of the fountains beyond the outfield fence and the Midwest landscape. Plentiful parking surrounds the stadium and fans can enter Kauffman Stadium through many locations. Once inside, circular ramps and escalators take fans to the club and upper levels. Upon entering, fans are on the main concourse of the stadium. To access the field and dugout box seats fans must either walk through the dugout or field plaza seats or go down the circular ramps. Anywhere throughout the stadium fans can enjoy the view of the fountains that are beyond the right field fence. On a hot day fans can stand beyond the ones in right field to cool down. Although today it is one of the oldest stadiums in baseball, it remains one of the best in the sport.

For nearly three decades Royals fans suffered through multiple losing seasons. For the first time since 1985, playoff baseball returned to Kauffman Stadium in 2014 as the Royals won the American League Championship. Led by stars including Mike Moustakas and Wade Davis the Royals made back to back appearance in the World Series, winning the 2015 World Series over the New York Mets. 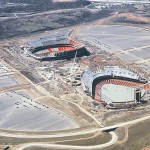 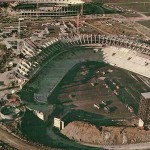 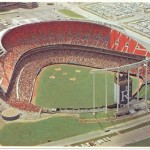 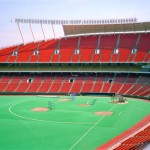 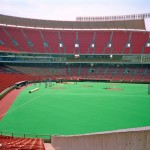 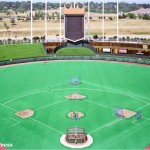 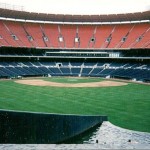 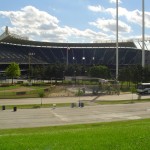 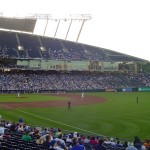 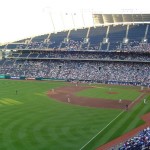 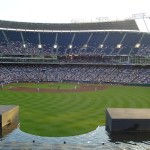 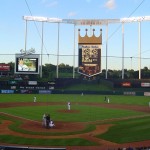 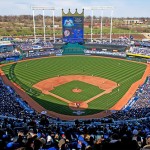 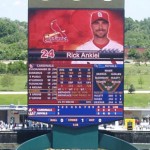 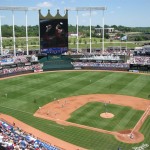 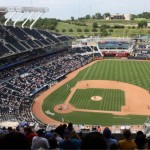 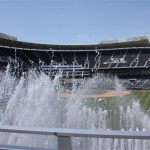 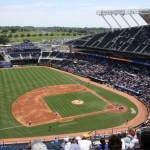 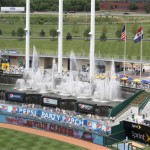 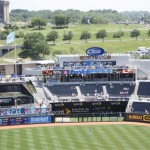 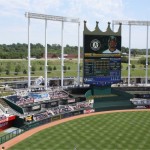 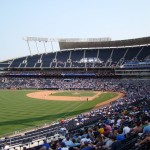 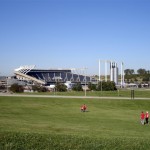 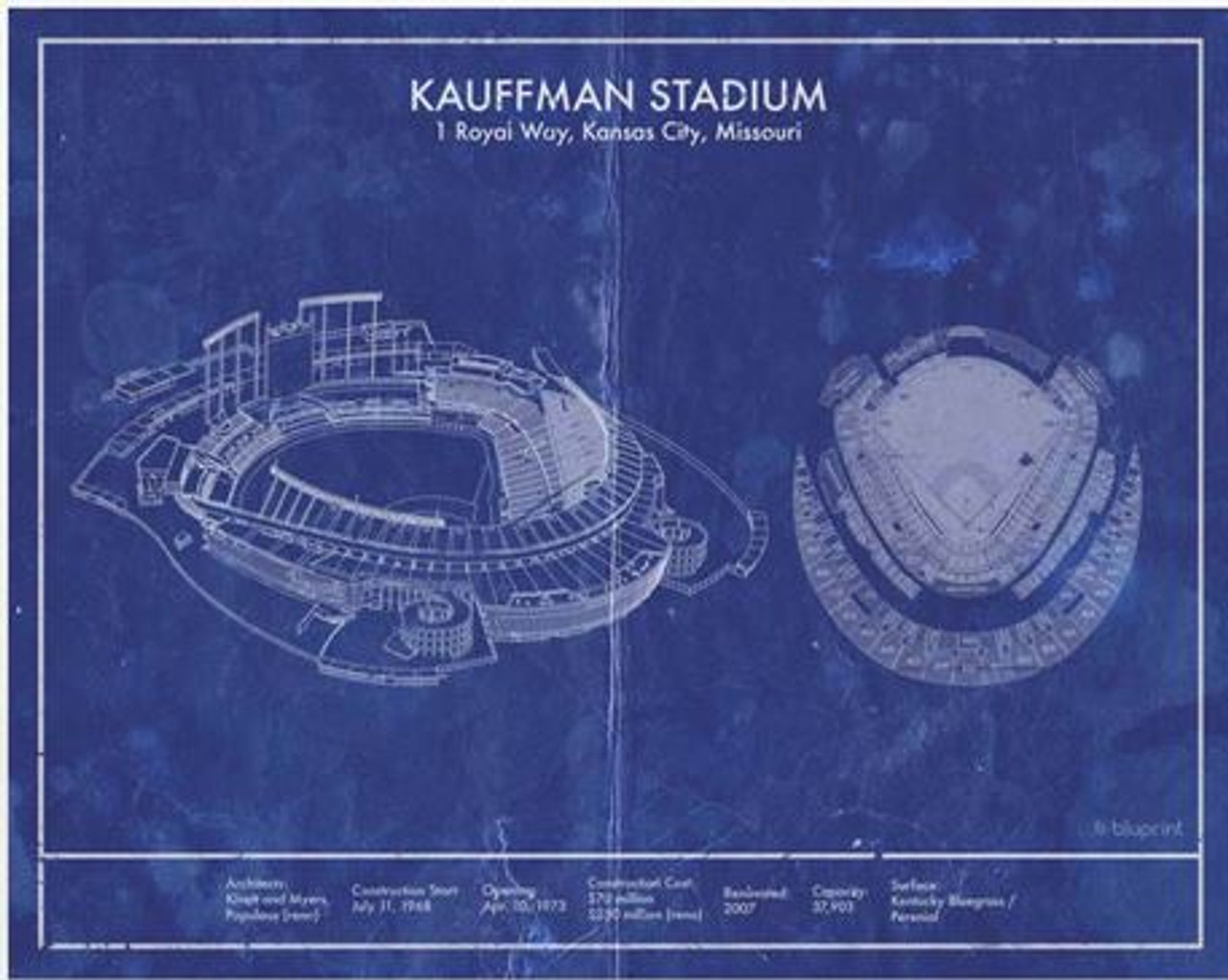 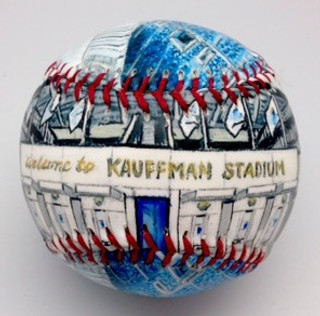 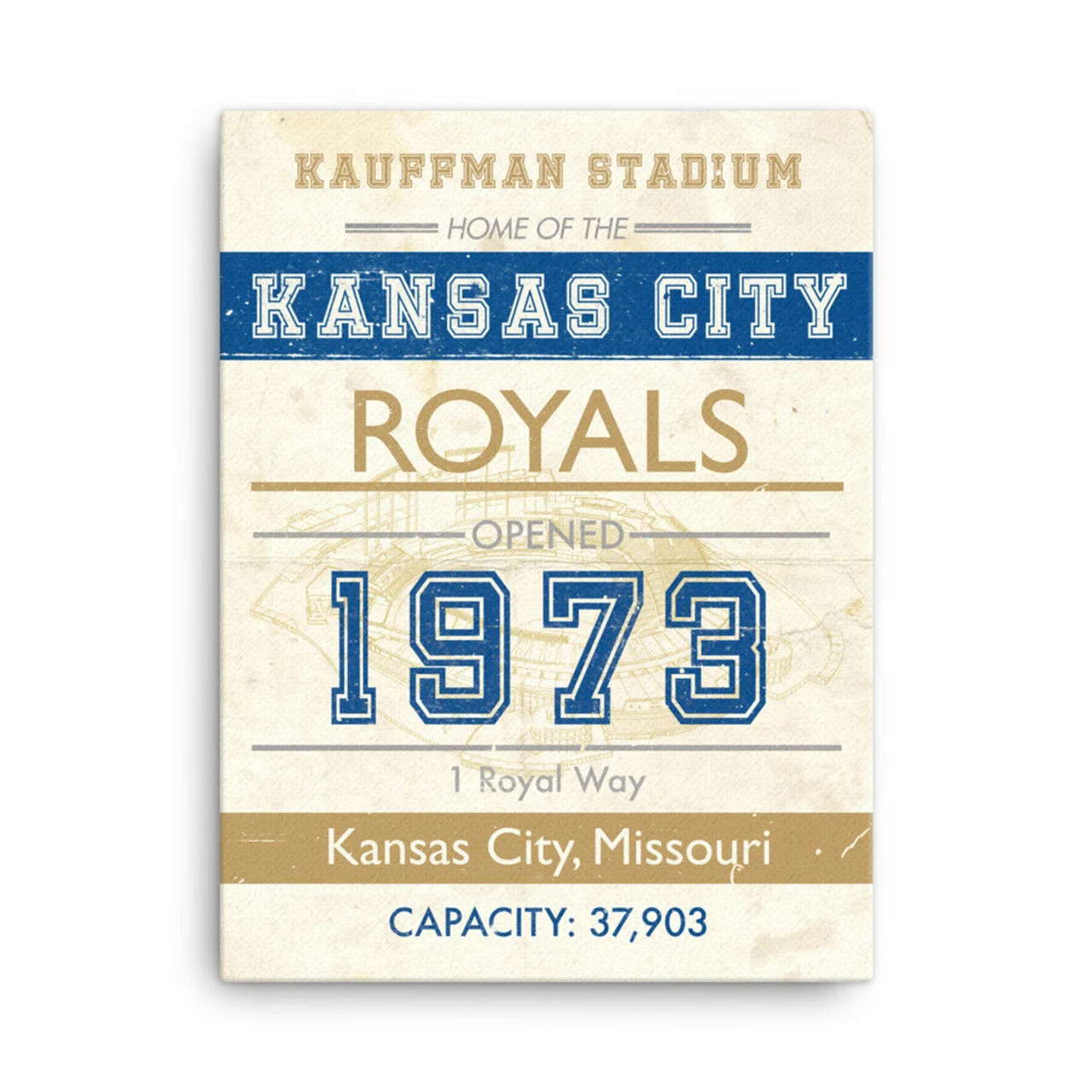