When one looks back at the history of RFK Stadium, its legacy will be known as the home of NFL’s Washington Redskins and not as a baseball stadium. For nearly five decades the Senators played at Griffith Stadium, that held around 30,000 fans. In 1955, owner Clark Griffith died and his son, Calvin, took control of team. During this time the District of Columbia began discussing the possibility of building a multipurpose stadium to house both the Senators and Redskins. However, by the late 1950s rumors began that the Senators were looking to relocate. That rumor became a reality after the 1960 season when the Senators moved to Minneapolis to Metropolitan Stadium. A new multi-purpose stadium was already under construction along the Anacostia River in DC when the Senators relocated. Although the original Senators moved, MLB awarded Washington a new franchise, also known as the Senators for the 1961 season. The team played one year at Griffith Stadium before moving into D.C. (District of Columbia) Stadium on April 9, 1962. D.C. Stadium became the first of many cookie cutter stadiums that would open over the next decade. Later named in honor of Robert F. Kennedy, baseball was played for a decade at RFK Stadium as the Senators moved to Arlington, TX becoming the Texas Rangers after the 1971 season. The final Senators game at the stadium was held on September 30, 1971 in front of a sparse crowd. Although the stadium lacked a baseball tenant after the 1971 season, it was the home of the Washington Redskins (NFL) until 1996 when they moved to FedEx Field.

After a 33 year hiatus, Major League Baseball returned to RFK Stadium in April 2005. Prior to 2005, several teams had been rumored to move to Washington, DC including the San Diego Padres and Houston Astros. From 1995 until 2004 the Montreal Expos struggled attracting fans to Olympic Stadium and had numerous financial and ownership problems. In 2001, MLB began studying the idea of relocating the Expos, deciding to move the team to DC and RFK Stadium in September 2004 for the 2005 MLB season. As part of the effort to bring the team to the city, RFK Stadium was renovated at a cost $18.5 million. Renovations included new dugouts, improvements to the clubhouses, scoreboard, pressbox, and making the seats in the lower deck retractable again as the DC United (MLS) continued to play at the stadium.

The Expos, renamed the Washington Nationals, played their first game at RFK Stadium on April 15, 2005 against the Arizona Diamondbacks. The baseball configuration for Nationals games at RFK Stadium was nearly identical as it was thirty years prior for the Senators. The large lower deck, consisting of three sections of orange seats extended from the right field foul pole to behind homeplate and to the left field foul pole. No lower level seating existed behind the outfield wall. A small section of white seats circled the field below the upper deck and the upper deck enclosed the entire field. Beyond the outfield fence were the bullpens, the Nationals behind the left field wall and the visiting team behind the right field wall. Missing from the Senators days at RFK Stadium was the large manual scoreboard that was located behind the right field fence. In its place was a large Washington Nationals clock. For three seasons the Nationals played at RFK Stadium. On September 23, 2007 the Nationals played their last game at RFK Stadium and moved into the 41,000 seat Nationals Park in April 2008. The stadium was home to the DC United soccer team from 1996 to 2017. Today the stadium is vacant. In September 2020 the District of Columbia announced plans to demolish RFK Stadium in 2022. 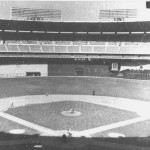 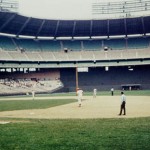 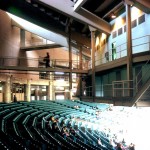 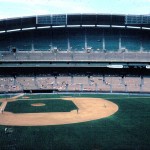 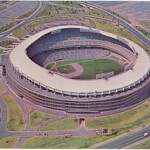 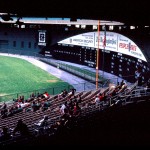 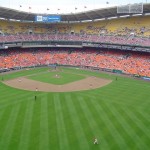 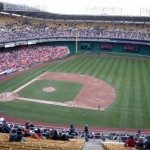 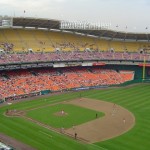 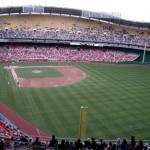 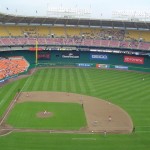 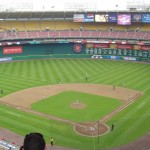 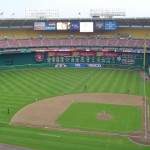 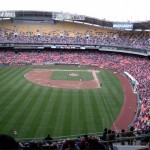 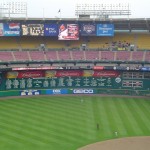 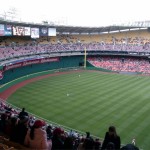 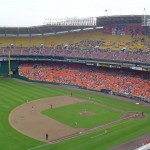 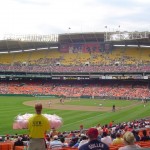 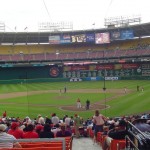 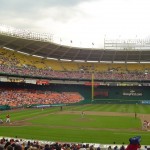 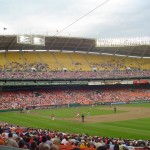 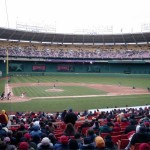 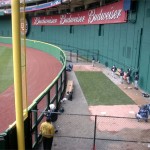 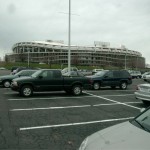