Jarry Park became home to the Montreal Expos in 1969 after MLB awarded Montreal a baseball team in 1968. At first a 25,000 seat stadium was chosen for the team to begin playing in but that idea was dropped after the city declined to spend $7 million on the stadium. A 3,000 seat stadium known as Jarry Park was selected as the location for the team to play at until a new stadium could be built. Montreal’s Mayor Jean Drapeau ensured that the ballpark seating could be increased to 30,000. Opening day came on April 14, 1969 when over 29,000 fans filled Jarry Park. One tier of seating extended from the right field foul pole to home plate and to the left field foul pole and bleacher seating in left field. A scoreboard was located behind the outfield

fence that was made up of wire in right field. Originally, the Expos believed that they would have been in a new stadium by 1972, but that turned out to be untrue. By 1974, there was talk of possibly revoking the franchise because a new stadium had not been built. However, Montreal was awarded the 1976 Olympics Games and a new stadium was built. The Expos played their last game at Jarry Park on September 26, 1976 and moved into Olympic Stadium in 1977. Today, Jarry Park is still used as a major venue for concerts, exhibitions and professional tennis matches. 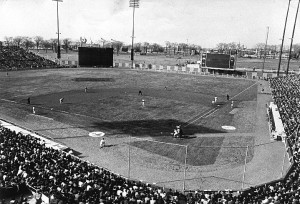