Baseball has been played along the banks of the Ohio River for more than a half century, first at Riverfront Stadium beginning in 1970 and since 2003 at Great American Ball Park. Home of the Reds, the ballpark’s construction helped revitalized the area along the river and is a centerpiece of downtown Cincinnati. Prior to Great American Ballpark’s construction the area along the river was the site of the multi-purpose Riverfront Stadium and massive parking lots. Riverfront Stadium was a standard circular facility that housed the Reds and Cincinnati Bengals (NFL). In the 1990s nearly every professional baseball and football franchise wanted a new single use stadium built that featured seating closer to the field, additional luxury suites and other fan friendly amenities.

In 1996 Hamilton County voters approved a bond to increase the sales tax to fund stadiums for both teams. Two locations for a new Reds ballpark were proposed: Broadway Commons and an area between Riverfront Stadium and US Bank Arena, known as the ‘wedge’. Reds officials were concerned about the cost of land at Broadway Commons whereas the land along the river was owned by Hamilton County. In November 1998, citizens solved the dilemma when they voted to have it constructed along the riverfront. Reds and city officials agreed to a lease and groundbreaking for the ballpark occurred on October 4, 2000.

In order for construction to begin at Great American Ball Park at the site between Riverfront Stadium and the multiuse arena, part of Riverfront Stadium had to be demolished. Nearly 14,000 seats were removed from the outfield part of the structure. For two seasons fans were able to watch construction of the ballpark beyond the outfield fence. Great American Insurance bought the naming rights to the ballpark for $75 million over 30 years; thus the stadium was named Great American Ball Park.

Great American Ball Park is a combination of new and classic ballparks and provides an excellent setting for baseball. Walking along the outside perimeter of the ballpark down Second Street, fans are greeted by a three-story building of brick and cast limestone, with the phrase “Rounding third and heading for home,” the signature sign-off of former broadcaster Joe Nuxhall, atop the building. Banners of great moments in Reds’ history also line this area. At the intersection of Second and Main streets is an opening to Crosley Terrace, the homeplate entrance, that most fans pass through when entering the ballpark. The terrace is about an acre of concrete, landscaped with grass and trees. Statues of Crosley Field-era players (Joe Nuxhall, Ernie Lombardi, Ted Kluszewski, Joe Morgan, Johnny Bench and Frank Robinson) dot the landscape, along with a pitcher’s mound built to Major League Baseball dimensions of the day. Grass in the terrace is sloped at the same incline as Crosley Field’s outfield. Special lighting illuminates the statues, stone benches and a 60-foot stone sculpture meant to depict the romance of the game are also located in Crosley Terrace. Adjacent and connecting to Great American Ball Park along Main Street is the Reds Hall of Fame Museum and team store. A rose garden, honoring Pete Rose, is located near the museum where his record breaking 4,192 hit was at Riverfront Stadium.

Upon entering the ballpark, fans have sweeping views of the ballpark. Great American Ballpark has approximately 42,271 red seats in three levels. The lower grandstand extends from the left field foul pole to homeplate and around to the right field foul pole. The second deck consists of club seats, luxury suites and the press box. Stretching from foul pole to foul pole, the upper deck is broken into two sections. The gap is an opening in the seating sections located between homeplate and third base. This enables people in downtown Cincinnati to see into the ballpark. It also allows the upper deck to be closer to the field than most in baseball. Doubled decked bleachers are located in left field and additional seating is located beyond the right field fence. With little foul territory at Great American Ball Park fans have excellent views of the game.

Above the bleachers in left field is the massive video/scoreboard. A clock atop the main scoreboard in left field is a replica of the Longines analog clock that was at Crosley Field. The bullpens are located beyond the outfield, the Reds in left centerfield and the visiting team’s bullpen behind the outfield wall near the right field foul pole. A brewpub, known as the Machine Room Grille is located in the left-field corner gives fans a place to relax and catch the ballgame with their friends. The bar features tons of memorabilia from the Big Red Machine era. Other club and dining options include the Championship Club, the Handlebar at Riverfront Club and Diamond Club. Located between the batter’s eye and the stands in right field is a 64 feet high and 36 feet wide homerun feature. It consists of two large smokestacks, a paddle wheel and a large misting system makes noise, shoots fireworks, creates mist and is a general source of entertainment. After the 2006 season, the Reds constructed a two story Riverboat Deck on top of the existing batter’s eye that is used as a party area. The 7,500-foot square foot rooftop deck holds about 150 fans. The newest addition to the ballpark is the right field videoboard. Add prior to the 2015 All-Star Game, the 90-feet wide by 31-feet high LED video board sits above the Sun/Moon Deck seats. 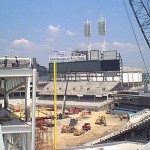 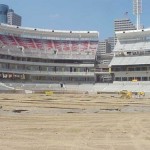 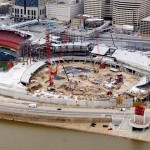 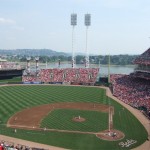 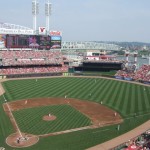 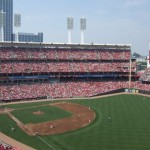 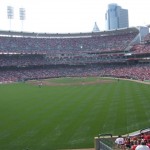 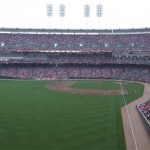 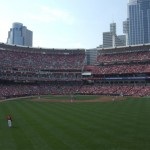 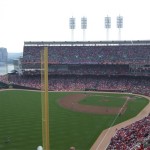 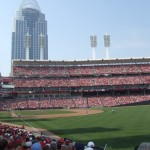 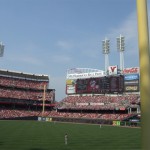 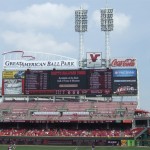 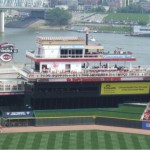 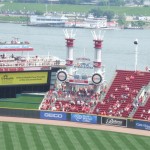 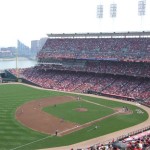 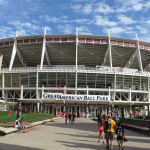 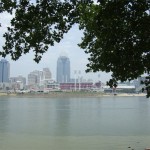 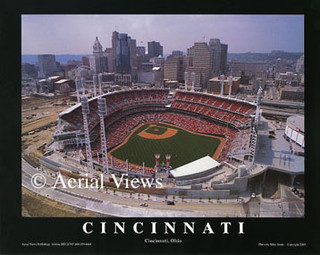 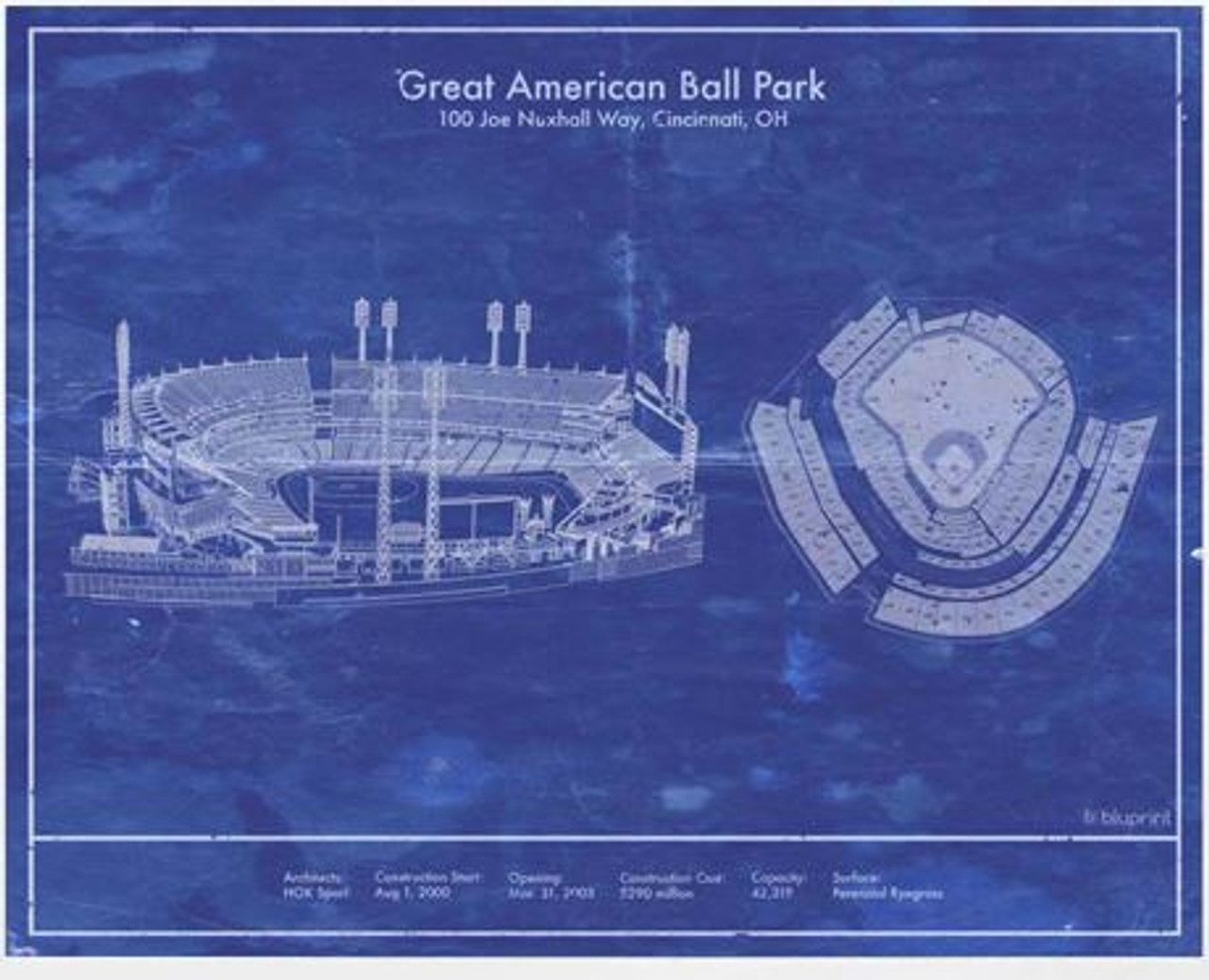 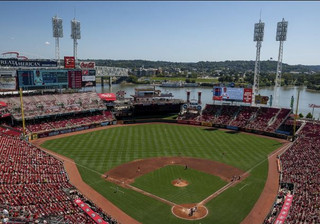