Known as “America’s Finest City” because of its amazing weather and white-sand beaches, the City of San Diego is the home of the Padres and Petco Park, one of baseball’s crown jewel ballparks. From their inception in 1969 through the 2003 season the Padres played at Jack Murphy Stadium, a giant multipurpose stadium they shared with the Chargers (NFL) in Mission Valley. In 1995 Larry Lucchino, who helped the Baltimore Orioles build Camden Yards, became President of the Padres in part to help the team get a new ballpark constructed.

In 1996 the club officially announced plans to build a ballpark in downtown San Diego. After winning the National League Championship in 1998, San Diego voters approved bonds for construction of a new ballpark. The 42,000 seat ballpark was originally scheduled to open in 2002 but in October 2000 financial issues led to construction being halted for more that a year. In November 2001, the City of San Diego approved a $166 million bond so construction could resume. In January 2003, Petco Animal Supplies, Inc. purchased the naming rights for $60 million over 22 years, thus the ballpark was named Petco Park.

A new chapter in the history of the franchise began on April 8, 2004 as the Padres played their first game at Petco Park against the San Francisco Giants. No longer did the club have to play at a cavernous stadium. The construction and opening of Petco Park in San Diego helped revitalize the entire core of downtown. The $411 million ballpark has a Southern California appearance with its white steel and sandstone facade that includes palm/jacaranda trees placed along the perimeter. Leading up to the entrance of the ballpark, fans pass by a palm tree court and water walls. Once inside Petco Park fans have a great view of the action on the field, but magnificent views of the San Diego skyline.  All of the 42,500 blue seats are close to the field and are angled toward the pitchers mound. The three tier grandstand extends from the right field foul pole around to homeplate and to the left field foul pole. Here is the Western Metal Supply Building, a historic multi-story brick building that was constructed in 1909. Instead of demolishing the building, the Padres turned it into a signature element of the ballpark.

The Western Metal Supply Building houses the team store on the first floor and has an opening to allow fans into a standing room area in left field. Located on the second and third floors of the building are party/luxury suites, with a restaurant on the fourth floor. Located on top of the building are 800 bleachers that provide tremendous views of the ballpark. These bleachers can be retracted in order for the area to be turned into a party area for fans. The main scoreboard sits above the seats in left field. Additional seating can be found above the right field wall where there are two levels of seating. Directly behind the centerfield fence is the Padres bullpen and a two-level “social space,” inspired by San Diego’s beach lifestyle is in right-centerfield for 600 fans. Added before the 2016 season, its located where “The Beach,” a kid’s sand area was once located (now located along K Street). Modeled after Southern California’s beach piers, the space features pilings and decking constructed from recycled composite wood. Drink rails will line the front row of both levels, which will combine to hold approximately 60 fixed seats. Directly outside the ballpark behind the centerfield area is the “Park at the Park.” This elevated grass park is a manicured park that is used for lawn seating and is a cheap way to watch games. Although some of the best views of the ballpark may come from this area, the view of the ballpark and downtown San Diego from the upper deck behind home plate are spectacular.

Several unique 200-foot towers supporting the grandstand and extending above the main grandstand support the lights for the playing field and house luxury suites and lounges. A Padres Hall of Fame, 250 seat auditorium, kids entertainment zone and theater are also located at Petco Park. Fans of all ages enjoy coming out to Petco Park for some fun and exciting Padres baseball. In an effort to make Petco Park less of a pitchers park, the Padres changed the dimensions before the start of the 2013 season. The dimensions to the right and left field foul poles and to centerfield remain the same but the distance to the left field power alley decreased from 402 feet to 390 feet and the right field foul pole from 402 feet to 390 feet. The team also moved the visiting team’s bullpen from down the foul line to behind the Padres bullpen. Before the start of the 2015 season, the old videoboard was replaced with a new HD videoboard that measures 61.5 feet high by 124 feet long. Below the videoboard, the last nine rows of seats were removed and replaced with open spaces for groups. In addition, 110 seats from the lower bowl below the scoreboard were removed creating a standing room only area with bar stools for fans. The project only slightly altered the seating capacity of Petco Park. In 2016 the Padres opened their first Hall of Fame at Petco Park. Located beyond the left field wall, just inside the ballpark gate, the Padres Hall of Fame celebrates the history of its minor and major league history. On July 12, 2016 San Deigo hosted its third MLB All-Star game and the first at Petco Park. 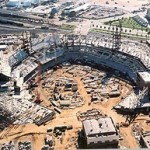 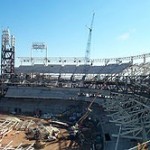 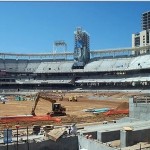 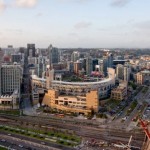 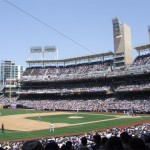 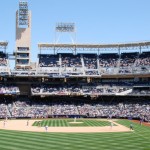 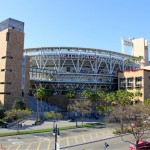 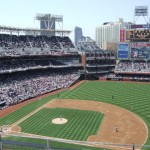 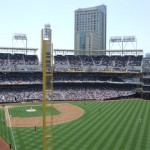 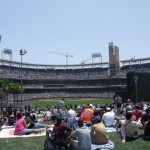 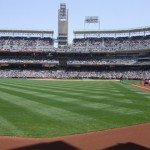 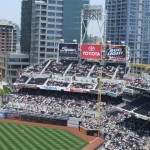 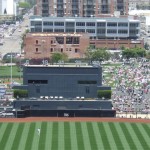 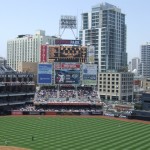 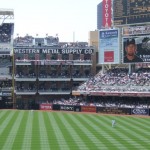 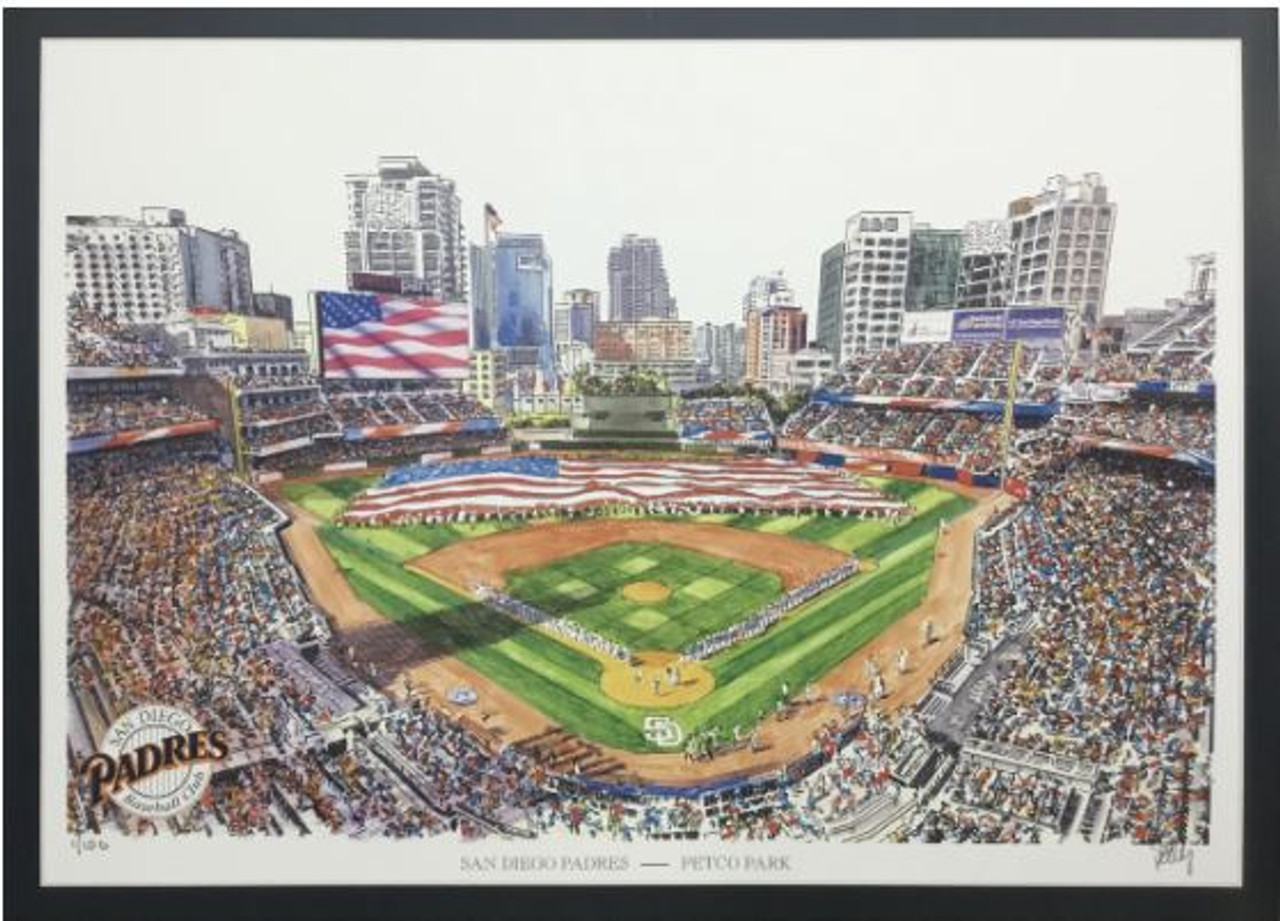 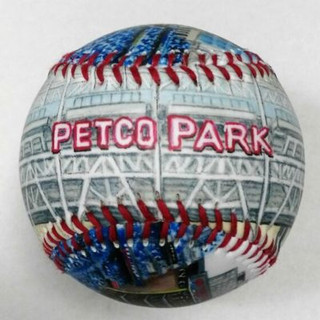 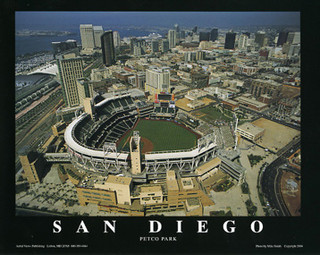 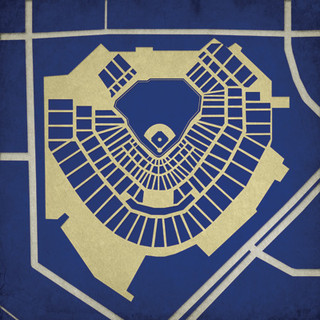 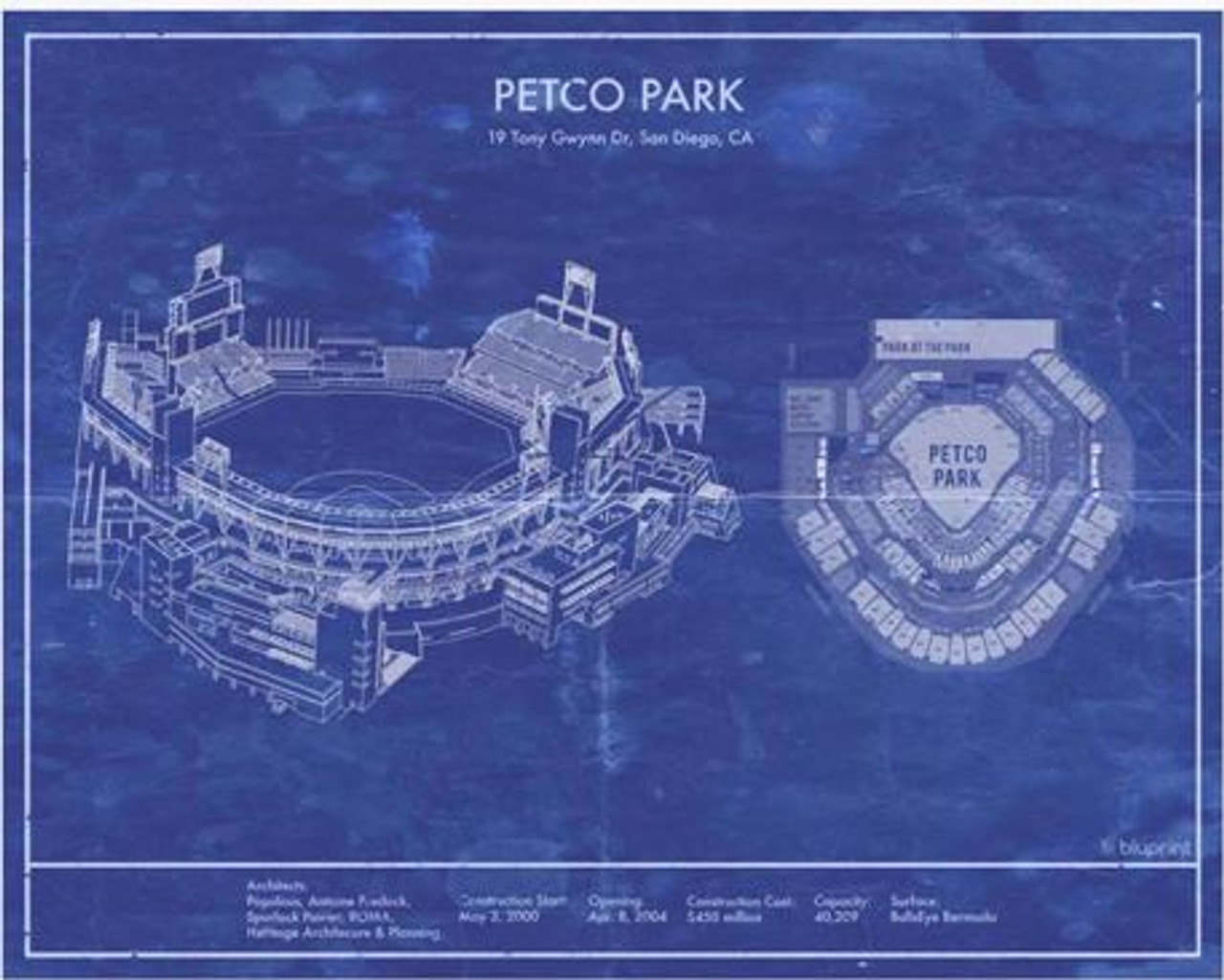