One of professional baseballs most successful franchises, the St. Louis Cardinals, can trace their history back to the latter half of the 19th century. Chris von der Ahe purchased the Brown Stockings in 1891 and renamed them the Browns as they became members of the American Association. They played at the second ballpark known as Sportman’s Park through the 1892 season. Following the season the American Association was absorbed by the National League and the team moved to a new ballpark, not far from the old one, with the same name, Sportman’s Park. A $45,000 ballpark was constructed on two city blocks between the streets of Prairie, Vandeventer, Lexington and Natural Bridge. It had a seating capacity of 14,500 and the Browns played their first game here on April 27, 1893. It featured three private boxes and an area for the press atop the roof of the single-story grandstand. It featured modern amenities for the time, toilet rooms and beer gardens.

In 1898 the Robison family purchased the club and the ballpark was renamed League Park. Tragically a fire tore through the stands during a game on April 16, 1898, killing one fan and injuring 100 others. It was rebuilt, but unfortunately another fire occurred on May 4, 1901. Luckily no one was hurt and the entire ballpark was not destroyed as the bleachers in the outfield remained standing. The ballpark was rebuilt by June. Between the time of both fires, St. Louis joined the National League and the club was renamed the Cardinals. The largest expansion at the park occurred in 1909 when a steel and concrete grandstand was built at the ends of the existing grandstand, increasing the seating capacity to 20,000. In 1911 Helene Britton became the first female owner in baseball after her uncle Stanley Robinson died. She renamed the ballpark Robison Field after her father and uncle. A new ownership group led by Sam Breadon purchased the team in 1917. Over the next several years the ballpark began to show its age and the cost to update the facility was too expensive. Ownership moved the Cardinals to another ballpark with the name Sportsmans Park in 1920. It was the home of the American League franchise, the St. Louis Browns. The Cardinals played their final game at Robison Field on June 6, 1920 against the Chicago Cubs. Robison Field was demolished several years later and became the site of Beaumont High School. 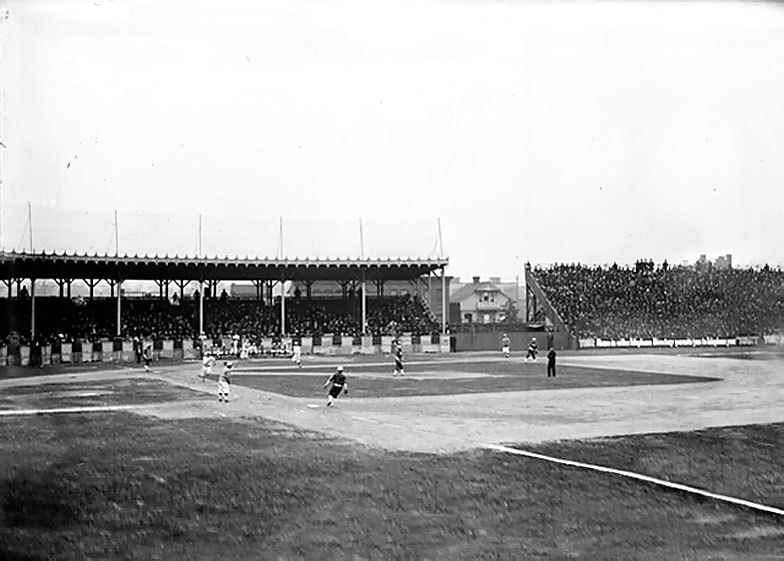